Springtime is here, so the baseball exhibition season is in full swing with the regular season soon to follow.

Baseball has been a rich subject for movies since the game's (and cinema's) earliest days. On occasion, baseball players themselves took a swing at being Hollywood stars themselves. Most were strictly minor league as actors, but a few nearly hit a home run.

Here's a lineup of baseball giants who tried their luck in front of the camera:

The Sultan of Swat was the subject of a dreadful 1948 biopic, "The Babe Ruth Story," starring a totally miscast William Bendix, but the real Ruth appeared in several films and shorts during his years with the New York Yankees. Babe was just 25 and a recent acquisition from the Boston Red Sox when he made his film debut — billed as George Herman "Babe" Ruth — in the 1920 film "Headin' Home." The comedy offers a semi-fictitious look at how the Babe became a baseball player. The white-pancake makeup the Babe wears in the movie gives him almost a zombie-esque quality. Though the film isn't much, he has charm to spare.

But he's even better in the 1928 Harold Lloyd silent comedy "Speedy." He's one of the passengers in Lloyd's taxi cab, and he plays himself to perfection. In 1942, the Babe was funny and poignant as himself in "The Pride of the Yankees," the wonderful true story about his Yankees teammate Lou Gehrig (Gary Cooper). 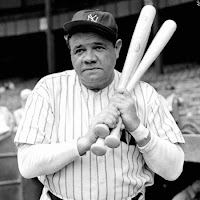 Speaking of the Iron Horse, the Yankees' star first baseman went Hollywood in 1938, the year before ALS felled his career, in a contemporary western called "Rawhide." Gehrig was tall, muscular and just as handsome as Cooper, who would play him in "The Pride of the Yankees." But he isn't much of a thespian — his New Yawk accent is pretty strong — and "Rawhide" isn't much of a movie, but any Gehrig fan will want to check it out. Ironically, the film's producer, Sol Lesser, had signed Gehrig to play Tarzan, but Lesser later said that "when [Gehrig] stripped his Yankee uniform for a leopard skin, two things became apparent. Both were Gehrig's legs: pillars of strength befitting baseball's iron man, their piano construction was functional rather than decorative." 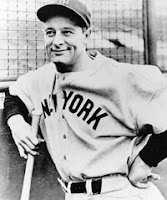 The Brooklyn Dodger created history when he broke the color barrier in Major League Baseball in 1947. And three years later, he starred as himself in the low-budget but moving biopic "The Jackie Robinson Story." Dodgers President Branch Rickey insisted that Robinson be cast as himself. Though he had never acted before, Robinson isn't too awkward in front of the camera, and having a young Ruby Dee play his wife, Rachel, probably aided his performance. The Hollywood Reporter stated that though "the film is choppy, episodic … director Alfred E. Green and his star maintain a serene dignity throughout it all." 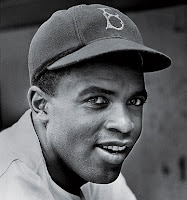 The New York Yankees stars appeared in two films in 1962, not long after Maris broke Ruth's home run record by hitting 61 in 1961. In the Cary Grant-Doris Day sex comedy "That Touch of Mink," Mantle and Maris play themselves and interact briefly with Grant and Day, who have dugout seats for the game at Yankee Stadium. They're pretty stiff in the cameo, but in the family film "Safe at Home!" they are as rigid as a 10-day-old piece of dried-out chewing tobacco. Bryan Russell plays a motherless boy who tells his Little League team he is great friends with the Yankees' sluggers, then heads out to persaude them to come meet his team. William Frawley in his last film role, playing the Yankees manager, is the best thing about it. 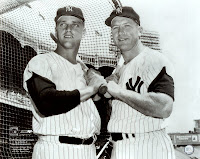 SOURCE
Posted by David Lobosco at 6:44 AM