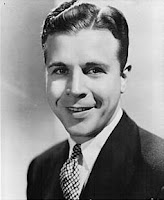 Here is an interesting article I found on Dick Powell. The writer really knows his stuff and definitely appreciates the talent of Dick Powell...

One of my favorite actors from the old days is Dick Powell. Not long ago I picked up a DVD of an early Powell movie titled “42nd Street.” The film includes such stars as Ruby Keeler who would later be paired with Powell in other films.

﻿I remember thinking as I watched “42nd Street” that Dick Powell looked like he just graduated from high school. I wondered how a kid that young got into a major Warner Brothers movie. It turns out Powell was no high school kid at the time but was actually 29 when the film was released in 1933.

Powell’s first appearance in a film was “Blessed Event” in 1932. He became a regular in Warner Brothers’ musicals including the popular Busby Berkeley series of Gold Digger movies. Although his boyish good looks and singing ability made him a natural for those musicals in the 1930s it would later turn out to be a handicap when he wanted to try more serious roles.

Richard Ewing Powell was born November 14, 1904, in Mountain View, Ark. He was the second of three sons born to Sallie and Ewing Powell. His mother encouraged all her sons to develop their musical talents and by the age of 5 Dick was singing for residents of Mountain View.

The Powell family moved to Little Rock in 1914 where young Richard sang in church and performed in high school musical productions. While attending Little Rock College he formed a band called The Peter Pan. After a short stint in college Powell went to work for the telephone company and got married. Neither his telephone company career or the marriage lasted very long. He then went on tour with Kentucky’s Royal Peacock dance band which took him all over the Midwest.

Powell eventually became the emcee at the Stanley Theater in Pittsburgh where along with introducing the movie he would sing and perform for the audience before the film started. Because it was a Warner Brothers’ theater he was soon discovered by a studio representative and offered a contract. 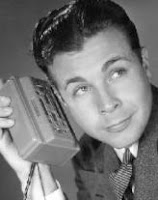 Along with appearing in musicals on the big screen Powell hosted the CBS radio series Hollywood Hotel. He also appeared in the film version of “Hollywood Hotel” in 1937.

Because he never thought of himself as a competent singer or dancer he asked the studio to cast him in more demanding and serious roles. In one interview he’s quoted as saying, “I was never much of a singer. As for my dancing, I couldn’t raise a foot. If I were a Bing Crosby or a Fred Astaire, I wouldn’t have minded musicals, maybe. But you know how long second-rate talent – I’m speaking of my singing and dancing – lasts with the movie-going public.”

Powell was finally able to buy his contract from Warners and made a few movies for other studios but didn’t feel they stretched his talent as an actor. When Paramount was casting the lead in “Double Indemnity” Powell lobbied the studio to give him the part. Instead it went to another actor trying to break out of the nice guy mold, Fred MacMurray.

Then in 1944 Powell finally convinced an RKO executive to give him the lead role in film adaptation of Raymond Chandler’s “Farewell My Lovely.” Because the title might lead audiences to think it was another Powell musical the name was changed to “Murder, My Sweet.” It was a turning point in Powell’s career. Critics and audiences loved this new side of the actor who went on to play similar tough guy roles in such films as “Johnny O’Clock” and “Pitfall.” 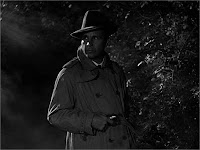 Powell also lent his talents as a detective to radio and starred in Rogue’s Gallery in which he played wise-cracking private detective Richard Rogue. Another detective drama on the radio starring Powell was Richard Diamond Private Detective. Several years later Powell as producer would bring Richard Diamond starring David Jansen to television.

Powell also directed several theatrical movies in the ’50s including “The Conqueror” starring a miscast John Wayne as Genghis Khan. Powell tried to talk Wayne out of the role but later said, “Who am I to turn down John Wayne?” The film has the distinction of being deadly for many of those involved in its production. Filming took place in Utah downwind from a former atomic bomb test site in Nevada and many of the cast and crew developed cancer later on.

Powell may have been one of those victims along with John Wayne, Susan Hayward, Ted de Corsia and Agnes Moorehead. Dick Powell was diagnosed with throat cancer and died of the disease Jan. 2, 1963, at the age of 58. 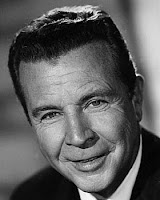 Although Dick Powell never reached superstar status he was still one of my favorites. He seemed to be one of those actors who didn’t take himself too seriously. I recently read a quote attributed to Powell that shows what I mean. Powell said, “The best thing about switching from being an actor to being a director is that you don’t have to shave or hold your stomach in anymore.”