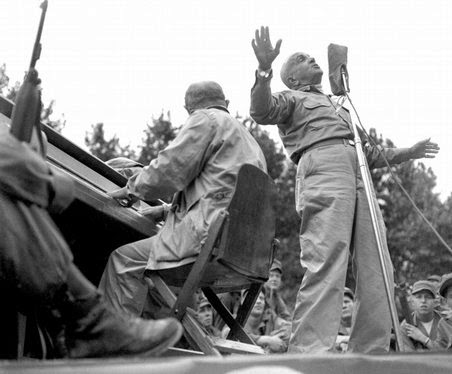 Al Jolson was one of the greatest entertainers for the good part of two decades. However, by 1940 he was a faded star. Audiences swooned singers such as Bing Crosby and newcomer Frank Sinatra. Even though he was forgotten, Jolson lobbied to entertain the troops overseas and in June of 1942 arrangements were made to send him to Alaska, via Seattle and Washington. As Al reported in a dispatch to Variety: “We arrived in Anchorage at 9:10 p.m., Anchorage time, and stayed at the Westward Hotel. When they told me to observe the blackout regulations and put my lights out I had to laugh, for in this part of Alaska at midnight you can thread a needle on Main Street. We gave two performances in Anchorage, each for an audience of 1,500 soldiers. Each show lasted an hour and I almost wore out the knees of my pants singing ‘Mammy’.

Al didn’t mention that rumours had swept the camp at Anchorage that Lana Turner was coming. “No she wasn’t - it was Dorothy Lamour,” some one else had said. When Jolson arrived on stage the soldiers’ disappointment expressed itself in the silence.

“Hello boys - I’m Al Jolson. You’ll see my name in the history books.” One soldier laughed, then another. Al told a joke, and another, and the laughter grew. He chatted about home, told them what he thought of Hitler and Hirohito and the laughter spread all round. Someone called for a song. Al gave them what they asked for and he was swamped by whistling applause. Al Jolson had found a new audience; and the soldiers had discovered Al Jolson.

Jolson: “Don’t you feel well, son?”
Soldier: “Oh, yessuh, Mista Jolson. It was on’y when you got to singin’ about Dixie. Well, Mista Jolson, it jest kinda got me - thass all . . . You know Mista Jolson, dis heah Arctic Ocean is an awful long way f’m tu-tty miles t’other side of Bummin’ham, Alabama.”

“Until now,” Al reported to Variety, “the transporting of our small piano had been an overture to an aspirin tablet, but from here on in it became a major headache. In order to entertain all the boys detailed in the vicinity of Anchorage, it became necessary to give shows in foxholes, gun emplacements, dugouts, to construction groups on military roads, in fact, any place where two or more soldiers were gathered together, it automatically became a Winter Garden for me and I gave a show. Imagine carting the piano to these locations. Sometimes it was by truck, once on a side car and once on a mule pack.” 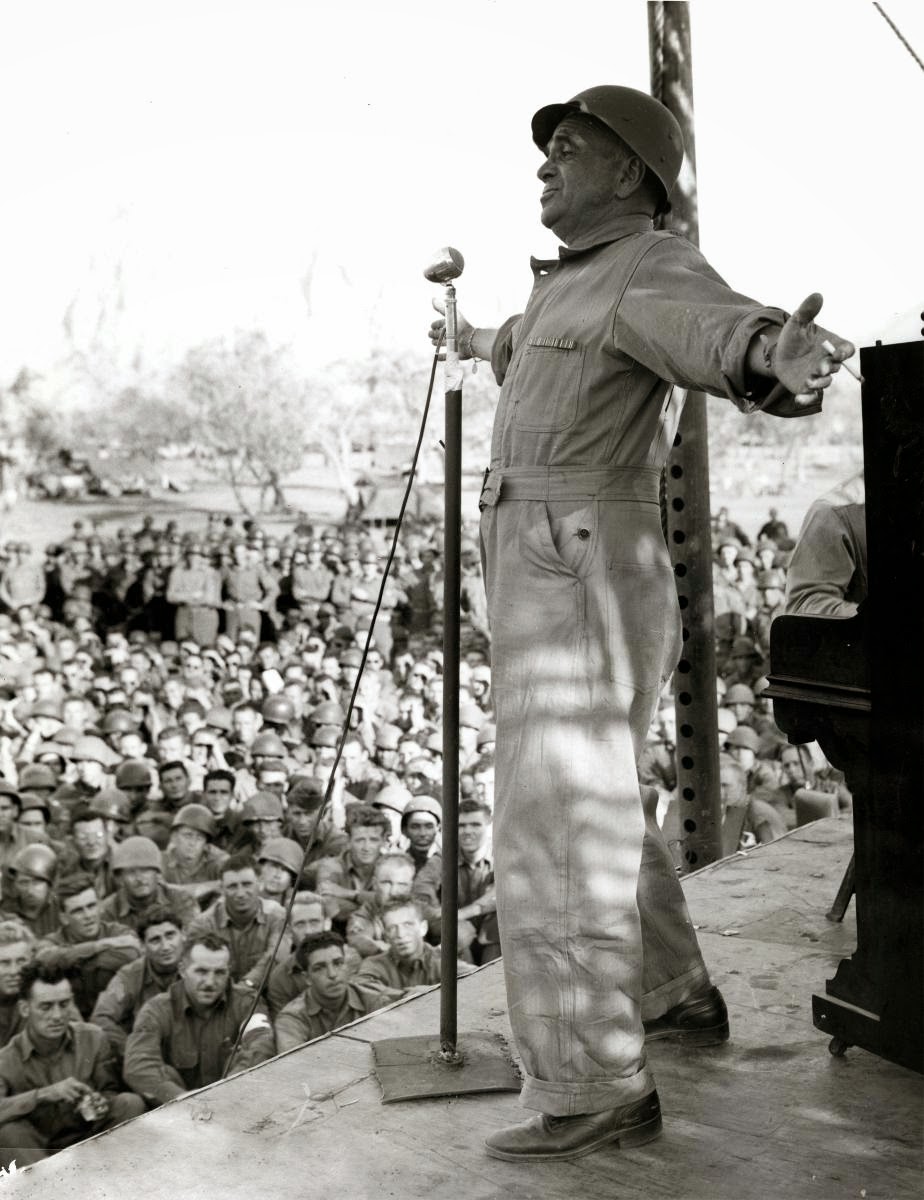 It was during the Alaskan tour that one young soldier called out: “Kiss my wife for me when you get back to New York, will yer Al?”

“I’ll do better than that,” Al called back. “I’ll take her out to dinner. What’s her name?”

After writing her name down with her telephone number, he called out: “Any more?”

Everyone shouted at once and Al wrote down as many names as he could.

“I’ll call them all when I get back,” he said. And he did, informing mothers, wives and girlfriends that their loved ones were in fine shape. Jolson spent time talking to the servicemen, establishing a relationship, till his arrival in a jeep was always met by a collective: “Hiya, Al!”

Stopping soldiers in the street, Jolson would say: “My name’s Jolson. Do you wanna hear me sing?”

‘Next Town Reilly’ was a one man Department of Morale Boosting. “Those guys wouldn’t exactly be immune to a shapely dish once in a while, too,” Al told the USO, “whether she could sing or not.”

Jolson: “We woulda brought Lana Turner but she’s busy with the Second Front.” 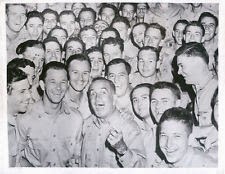 In July 1942 Jolson and Fried toured all the US bases in the Caribbean before the USO flew them, along with actress Merle Oberon and singer Patricia Morison, to England and Northern Ireland. Singing whatever was wanted, wherever he wanted, even to troops on street corners, he enjoyed every round of applause. He told servicemen what he had told their fathers about English beer: “It should have been put back into the horse.”

The troupe had been scheduled to appear at the London Palladium with Ben Lyon and Bebe Daniels but Merle Oberon refused to appear. “We are here to entertain the troops, not the general public,” she said. Jolson was furious and announced he was returning to the United States - alone. “I just feel that I could better on my own than I could as a member of a troupe,” Jolson explained to the New York Times. “If I want to crowd in an extra show for defence workers in factories, I’d be able to do it.”

Jolson hadn’t ‘gone over’ as well as he hoped with some of the English audiences and as he sat depressed in the bar of the Savoy Hotel, Ralph Reader walked in whistling ‘Keep Smiling at Trouble’.

“English, English!” he excitedly greeted Ralph and they reminisced about their days at the Winter Garden. “They were great days, English, great days,” he said with a tear in his eye.

New York Times: “There were few jokes in his talk. The comedian was playing a straight part . . . For, like many other comedians, at heart, Jolson is serious and sentimental.”
New Yorker: “We’ve just heard from a soldier who was fortunate enough to be on hand at one of the entertainments presented before the troops in Ireland by Jolson and some of the other performers from the States. Jolson, our soldier reports, concluded the entertainment with what was obviously considered to be the best number in his repertoire. It was ‘Brother Can You Spare a Dime?’ - and Jolson gave it, as the people say, everything. No other happening in recent weeks has given us such a sense of this significant moment in history.”

‘The Colgate Show Starring Al Jolson’, a weekly radio show that CBS signed Jolson to do, ran until June 1943. Usually opening the show with an up-tempo number like ‘The Yankee Doodle Blues’, or “I’m Sitting On Top of the World’, he usually ended with a sentimental ballad like ‘Sonny Boy’. The show’s female vocalist was Jo Stafford and the musical director was Gordon Jenkins.

Gordon Jenkins commenting on Judy Garland and Frank Sinatra: “Neither one, I have to tell you, had the electricity that Al had.”

In July 1943, Al left on an overseas tour to entertain the troops. Since Martin Fried had been drafted, Al needed a pianist to accompany him and asked his friend Harry Akst. At their first stop, Georgetown, British Guiana, Al found he couldn’t reach the high notes at the close of ‘Swanee’. In a panic, he was ready to give up the whole tour. Harry had to convince him that he didn’t have to cash in on high finishes - Crosby didn’t. “They died with vaudeville,” Harry explained. 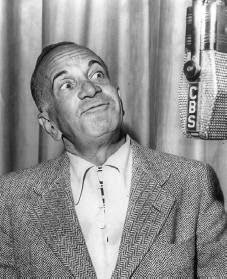 The new Al Jolson voice was born - not so light and breezy but deeper and more mellow.

Jolson had already cancelled his thirteen Colgate radio shows programmed for the fall when he suddenly began to feel bad. In an emergency flight, Al and Harry flew home to Miami Beach on 21 September 1943. Less than two weeks later while standing in a hotel lobby in New York, Jolson suddenly collapsed. Jolson woke up in a hospital bed to find he had picked up malaria from overseas and it had turned into pneumonia. His temperature reached 105F and doctors had to contact a military hospital for the proper serum before he began to recover. “No more overseas tours for you,” the doctors told him. After recuperating in Miami he went back to work playing himself in a film biography of George Gershwin called Rhapsody in Blue.

In October, Al and Harry began another tour of army hospitals. Winding up in Florida, they then drove up to New York, before driving west playing to a string of hospitals en route to California. By the time they reached Los Angeles, Al was complaining of feeling run down. Suddenly struck down by severe chest pains, Al was rushed into the Cedars of Lebanon Hospital. Malaria had struck again and this time with a malignant strain to it.


The Warner brothers, Harry and Jack, were gravely concerned and requested General Arnold, head of the Army Air Services, to fly two of his top physicians to Los Angeles. Because of Al’s tremendous war work the request was granted. The doctors saved his life but had to remove parts of two ribs and cut a malignant slice out of his left lung. Not allowed any visitors for a week, Jolson told his nurse: “I’ll never sing again.” Fortunately for soldiers and the world, Jolson would sing again... 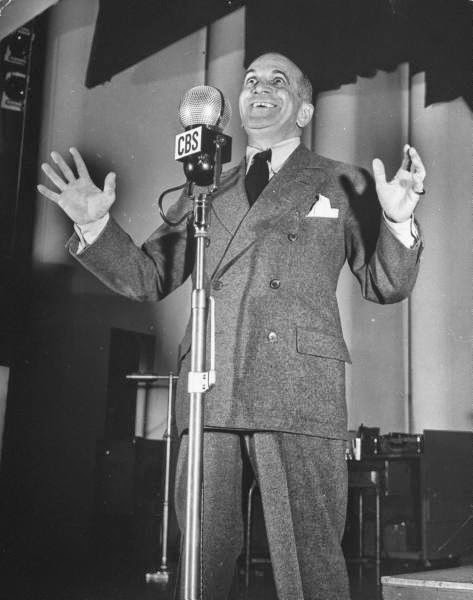