MOVIES THAT HAVE CHANGED MY LIFE

Movies affect everyone in different ways. Casual movie viewers are different than movie buffs, because the movies do not seem to affect them as much as they do to the true movie lover. Every movie lover has watched movies that have changed their lives. I recently turned 40 (ugh), and I have almost been a movie lover since then. I have a lot of movies that have had a profound influence on my life. Here are five films off the top of my head that have remained me with through my growing up: 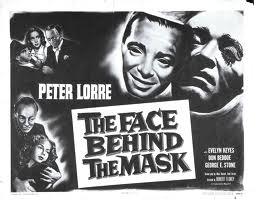 This is a little known B-movie put out by Columbia Pictures. Starring the great Peter Lorre, the film tells the story of a meek immigrant that just wants to live the American dream. That American Dream for Lorre becomes a nightmare when the tenement he found a place to live in catches fire and severely deforms him. No one will help him as society views him as a monster. He joins a gang and rises in their ranks quickly. When Lorre becomes rich from his gangster dealings, he has a doctor construct a mask to hide his burn scares. As Lorre becomes movie involved in murder, stealing, and underhanded dealings – the little shy immigrant he once was disappears, until he meets a blind girl (played expertly by Evelyn Keyes).  Keyes makes Lorre come alive again, and he realizes she loves him for what is on the inside and not the outside. He tries to leave the gang, but he faces dire consequences. The movie is short, but the story of the shy immigrant has always tugged at my heart strings. I think about this movie at least once a month. It has never been released on DVD, but I have a great copy from TCM, who shows it maybe every other year. It is really a tender and sad story.

Although this movie is on the borderline of a classic and a modern movie, I grew up with the movie, and it has been a part of my life for a long time. This Steven Spielberg masterpiece is also my favorite movie of all-time. I have watched the movie 75-100 times, but I have to admit if I watch it in a dark room at the right time, it still scares me. When I first saw the movie as a child it terrified me. For a good five years or so after watching the movie, I could not have my arms or legs dangle off of my bed for fear that a shark would come and bite me! This film is a great example of the type of horror movies I love. I love a movie where you don’t see the monster – at least right away. The mechanical shark during film production kept on breaking, so Spielberg had to create scenes without the shark. Thank goodness is broke so much. Because of the problem with the production, the movie created the suspense and the terror without seeing the shark. The movie, the theme song, and the terror of the movie has never left me. 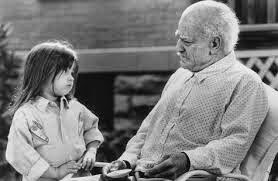 Growing up, I had a close relationship with my Grandfather. For a long time, until I met my wife, he was my best friend. When my Parents were emotionally and physically not there – my Grandfather was. This little known 1995 film starring Peter Falk and DB Sweeney has affected me more than any other film. The movie is about a grandfather (played by Falk) who has to raise his grandson after his daughter and son in law are killed. The movie spans several years as the grandfather and grandson grow up together.The grandson gets older and never forgets his grandfather. When he gets married, his grandfather is right there. When the grandson’s wife (played by a young Julianne Moore) is killed, Peter Falk steps in to help with his great grandson. I remember seeing this movie with my Mom and Stepfather.   Whenever I would go to the movies with them, I would dissect and review the movies on the way home. At the end of this movie, I cried for fifteen minutes straight on the way home. When the movie came out on DVD, we had my Grandparents over and all watched it together. My Grandfather even had a tear in his eye. My Grandfather died in 2002, and although I have this movie on DVD I have only watched the movie those two times. It affected me that much.

Anyone who knows me, know I am a huge Bing Crosby fan. My Grandfather instilled in me a love of the music and movies of the era of golden Hollywood. My Grandfather never liked this film, because he liked his Bing Crosby as a carefree crooner. I thought this film was amazing, because it showed Bing’s range as an actor. He was amazing in this role as the down on his luck entertainer who lets booze destroy his marriage and career after the death of his son (played by a young Jon Provost). Grace Kelly played his wife and won an Oscar for her role as the emotionally tired wife. The scenes with Bing and his son are touching, and I never fail to tear up after the scene where his son dies. He is walking happily with his son, when a photographer wants to take a picture of Bing. He lets go of his son’s hand to pose for a picture briefly, but his sons runs into traffic and is killed. It is amazing the pain Bing conveys in his eyes and the anguish he feels as he blames himself through the years. The movie has an optimistic ending, but in the back of my head I can’t keep thinking that the story was not over. I can’t picture ever being able to recover after the death of a young child. Seeing Bing in this film makes me hope I never have to. 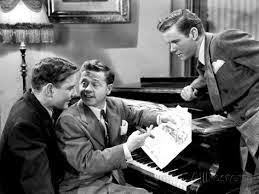 One of my favorite musicals is this so-called biography of composer Richard Rodgers and lyricist Lorenz Hart. It is not a great musical, and as a biography there is not much fact in the film, but the idea of the movie and the music has always stuck with me. The majority of my favorite songs were written by Rodgers and Hart like: “My Funny Valentine”, “Spring Is Here”, “You Are Too Beautiful”, “My Romance”, “My Heart Stood Still”, and “He Was Too Good To Be True” – among countless others. The film showcased the music as well as the lives of the composers. Rodgers was played by Tom Drake, and Lorenz Hart was played expertly by Mickey Rooney. In the movie, Hart is portrayed as a lonely and sad man who never finds love. In real life, Hart was an alcoholic who could not come to terms with his homosexuality, and he literally died in the gutter in 1943. I wish they would make a movie on Lorenz Hart’s life now, because they could show everything about Hart’s life that they were too afraid to show in 1948. The movie is not great, but the story and talent of Lorenz Hart is timeless...

Posted by David Lobosco at 1:37 PM