MARTIN AND LEWIS: THE END OF THE LAUGHTER 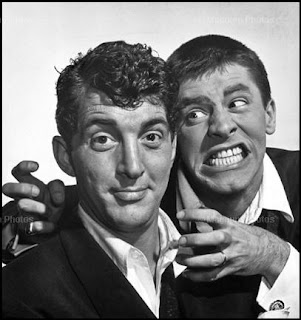 The end for one of the greatest teams in show business happened very quietly on July 25, 1956. The place was the Copacabana nightclub in New York City. Dean Martin and Jerry Lewis were scheduled to go onstage for their 2:30am show. It was to be their last of three shows that night and also the final appearance of the most popular comedy team in Hollywood history.

After ten years together Martin and Lewis were calling it quits, and even today some 56 years later we are still wondering why they broke up. The common perception was that Dean Martin was the lazy one. He wanted to take it easy and play golf. Jerry Lewis was the fiercely driven workaholic, who never wanted to stop performing. There may be some truth to those rumors but through the research I have done I think there was something much deeper.

Dean Martin was the one who initiated the split, although Jerry Lewis knew it was happening. Dean was sick and tired of being knwon as the "straight man" and even "stooge" for his partner. The performing the team did was okay but Dean had grown to hate the Martin and Lewis films, claiming he played an "idiot"in all of them. By 1956, the plots had become pretty much the same. Dean sang two songs in the film and got the pretty girl, but Jerry got all the laughs and best scenes and storylines. The reviews for the boys'movies were becoming startlingly similar as well. While all of the critics raved over Jerry's brilliant comedy, Dean was mostly looked upon as a mediocre singer who was an afterthought in the film.

So after filming their final picture picture together Hollywood Or Bust the previous June, Dean and Jerry announved to a shocked public that they were going to split up and go their separate ways. (Supposedly during the filming of this final film, Martin and Lewis did not even speak to each other unless they were filming. The anger was also evident in their performances. During the last engagement at the Copa, during one of their comedy routines, Dean slammed his foot down on Jerry's foot with the force of a piledriver, and Jerry had to peform in bedroom slippers for the next several performances. Dean told the press it was an unfortunate accident though. 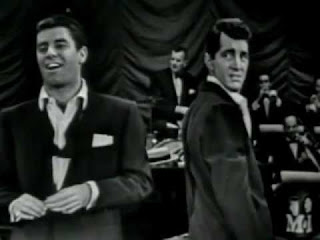 During their final engagement at the Copa, every celebrity possible was there such as Frank Sinatra, Sammy Davis Jr, and Jackie Gleason - to just name a few. The showgirls who performed with Martin and Lewis had tears in their eyes, and all eyes were on the comedy duo for this last performance. They did their usual act - Dean singing a few songs, and Jerry clowning around. Their final bit singing the title song from their movie Pardners, and they walked off of the stage. Jackie Gleason jumped up on the stage ,and yelled "Folks, this can't be allowed to happen!"-but after ten years together it was the end.

The general consensus was that Jerry rellat was devastated by the split, but that Dean was actually relieved. Martin was anxious to move on to a solo phase of his career. On that night, Lewis supposedly had to be sedated, but Martin went home and had fried egg sandwiches with his wife. 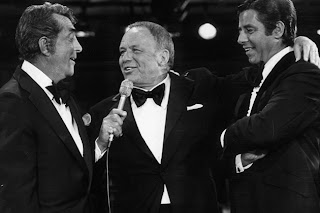 Mutual friend Frank Sinatra would orchestrate a reunion exactly twenty years after their split when he brought Dino out during Jerry Lewis' MDA telethon show. They had not spoke to each other in twenty years. Lewis was moved by the reunion. He claimed that he and Dean kept in touch after that reunion, but from what I know about Lewis he is a history revisionist, and his versions of events often are told as to make him look better. Publicly they would be seen together one more time. For Dino's 75th birthday in 1992, Jerry Lewis brought out a cake during one of Dean's performances. It was one of Dean's last performances, and it was a final end to an association that only lasted ten years, but it has entertained audiences for nearly six times that amount. Dean Martin died on Christmas Day in 1995, and Jerry Lewis is still making appearancesand even working on a movie, despite failing health. I like to remember the two as great entertainers, great performers, and as the song says "best pardners, buddies, and pals"... 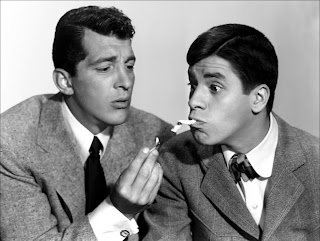