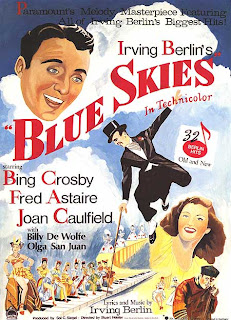 For over two decades, Bing Crosby was the number one star at Paramount. He successfully rescued the studio from bankruptcy in the early 1930s. Despite that, Paramount rarely put Bing in a technicolor movie. However, when the studio did put Bing in a big budget musical, the result was always out of this world. That was the result of 1946's Blue Skies.

As in Holiday Inn (1942), Blue Skies is designed to showcase the songs of Irving Berlin. The plot, which is presented in a series of flashbacks with Astaire as narrator, follows a similar formula of Crosby beating Astaire for the affections of a leading lady. Comedy is principally provided by Billy De Wolfe.

Joan Caulfield was the protege of Mark Sandrich - who directed many of the Astaire-Rogers musicals - and who was originally slated to direct this film. He died of a heart attack during pre-production and Stuart Heisler was drafted in to replace him. Heisler wanted Caulfield replaced, but Crosby - who was reportedly having an affair with Caulfield - protected her.

Tap dancer Paul Draper was the initial choice to partner Bing Crosby, however, during the first week of production Draper's speech impediment and his trenchant criticism of Caulfield's dance ability led Crosby to insist on his replacement by Astaire who, then forty-seven, had already decided that this would be his final film and that he would retire, having spent over forty years performing before the public. The film was billed as "Astaire's last picture" and its very strong performance at the box office pleased him greatly, as he had dearly wanted to go out on a high note.

The reasons for Astaire's (temporary) retirement remain a source of debate: his own view that he was "tired and running out of gas", the sudden collapse in 1945 of the market for Swing music which left many of his colleagues in jazz high and dry, a desire to devote time to establishing a chain of dancing schools, and a dissatisfaction with roles, as in this film, where he was relegated to playing second fiddle to the lead. Ironically, it is for his celebrated solo performance of "Puttin' On The Ritz," which featured Astaire leading an entire dance line of Astaires, that this film is most remembered today. 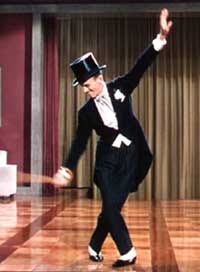 The story is told in a series of vignettes and musical numbers that serve to show events in flashback. Our narrative link is New York radio star Jed Potter, who once was a renowned Broadway hoofer. The conceit is that he is on the air, telling his life story... which does not yet have an ending. The tale starts just after World War I and centers around two men who became friends while serving in the Army: rising dancer Potter and the business-minded Johnny Adams. While young, hardworking Potter dreams of and works for stardom, the more laid-back and less disciplined Adams has hopes of becoming a successful nightclub owner. 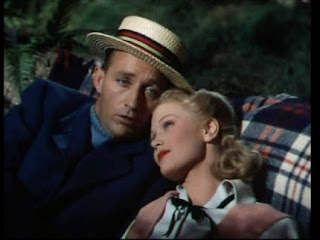 In time, dancer Potter falls in love with a band singer, a "very pretty girl" named Mary O'Hara. He takes Mary to Adams' nightclub, and she takes a shine to Adams. Potter warns Mary that his old buddy is not the marrying kind. So, of course, she marries Adams. The union is not a happy one, despite the birth of a child. Adams' nightclub business is anything but a resounding success, and it turns out Potter was right: Adams is self-centered and unable to commit to his nightclubs, his marriage, or his daughter. The couple divorces, and Mary tries again with Potter. The two even become engaged. But Mary can't go through with the wedding and takes off. A devastated Potter turns to booze and subsequently suffers an accident that puts an end to his dancing career. He winds up behind a radio microphone, sharing his story with his audience, hoping that wherever Mary is, she can hear him.

Blue Skies was one of the biggest money makers of 1946. On a personal note, the film contains one of my favorite Bing songs "You Keep Coming Back Like A Song". The song was nominated for an Oscar for best song but lost. The movie also ranks as one of Bing Crosby's best movies for Paramount. If you are a Bing Crosby fan and/or a Fred Astaire fan, then this movie is for you. Blue Skies has got it all...
Posted by David Lobosco at 5:53 AM