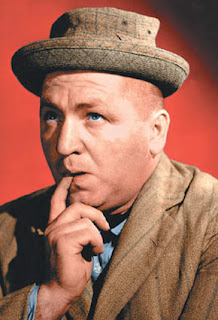 Jerome Lester "Jerry" Horwitz, better known by his stage name Curly Howard, was an American comedian and vaudevillian. He is best known as a member of the American slapstick comedy team the Three Stooges, along with his older brothers Moe Howard and Shemp Howard, and actor Larry Fine. Curly is generally considered the most popular and recognizable of the Stooges. He is well known for his high-pitched voice, vocal expressions ("nyuk-nyuk-nyuk!","woo-woo-woo!", and barking like a dog), as well as his inventive physical comedy, improvisations, and athleticism.

An untrained actor and natural comedian, Curly borrowed (and significantly exaggerated) the "woo woo" from "nervous" and soft-spoken comedian Hugh Herbert, but was otherwise an original and inspired performer. Curly's unique version of "woo-woo-woo" was firmly established by the time of the Stooges' second film Punch Drunks in 1934.

By the end of the 1930s, Curly Howard was clearly the star of the Three Stooges. His childlike mannerisms and natural comedic charm made him a hit with audiences, particularly children. He was famous in the act for having an "indestructible" head, which always won out by breaking anything that assaulted it, most notably (fake) saw blades. Having no formal acting training, his comedic skill was entirely spontaneous. 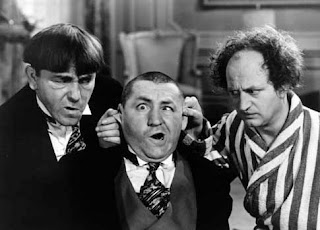 By 1944, Curly's energy began to wane though. Films like Idle Roomers and Booby Dupes present a Curly whose voice was deeper and his actions slower. After the filming of Idiots Deluxe, Curly finally checked himself (at Moe's insistence) into Cottage Hospital in Santa Barbara, California on January 23, 1945 and was diagnosed with extreme hypertension, a retinal hemorrhage and obesity. Curly's ill health forced him to rest, leading to only five shorts released in 1945 (the normal output was six to eight films per year). It is also believed that Howard suffered the first in a series of mild strokes at this time. Moe pleaded with Harry Cohn to allow Howard some time off upon discharge to regain his strength. Cohn would not halt the production of his profitable Stooge shorts and flatly refused Moe's request. Author Michael Fleming stated that "...it was a disastrous course of action." 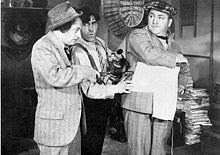 The first film produced after Curly's stroke was the lackluster If a Body Meets a Body, and his actions and mannerisms were noticeably slower. In the hands of a sympathetic director like novice Edward Bernds, Curly could produce decent work. This was because Bernds painstakingly devised ways that the ailing Stooge could still be the star without actually contributing a great deal. Films like Monkey Businessmen (in which Curly had to be coached by Moe on camera), Micro-Phonies and A Bird in the Head were examples of Bernds factoring in the reality that Curly was no longer in his prime. Other directors, such as Jules White, simply shifted the action to Moe and Larry. Films like Beer Barrel Polecats and Uncivil War Birds were mediocre at best and clearly showed that Curly was suffering.

Two of Jules White's efforts—Three Loan Wolves and Rhythm and Weep—clearly display a sick Curly as indicated by his much slower movements. Ed Bernds, however, was lucky enough to capture the ailing Stooge on an "up" day when filming Three Little Pirates. Curly seemed better and there was some hope that his illness was finally under control. "I guess I should be thankful that Curly was in one of his 'up' periods," Bernds said later."In Three Little Pirates, he was terrific. It was the last flash of the old Curly." 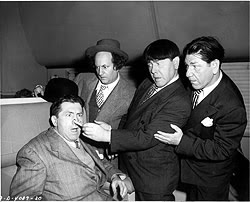 Half-Wits Holiday would be Curly's final appearance as an official member of the Stooges. The film was a remake of the comedy, Hoi Polloi. During filming on May 6, 1946, Curly suffered a severe stroke while sitting in director Jules White's chair while waiting to film the last scene of the day. When Curly was called by the assistant director to take the stage, he did not answer. Moe went looking for his brother: he found Curly with his head dropped to his chest. Moe later stated that Curly's mouth was distorted, and he was unable to speak: all he could do was cry. Moe quietly alerted director Jules White of Howard's situation, leading White to quickly rework the scene to be divided between Moe and Larry. Curly was then rushed to the hospital, where Moe joined him after filming for Half-Wits Holiday wrapped. After being discharged, Curly took up residence at the Motion Picture & Television Country House and Hospital in Woodland Hills, California.

Still not fully recovered from his stroke, Curly met Valerie Newman, whom he married on July 31, 1947. A friend, Irma Leveton, later recalled, "Valerie was the only decent thing that happened to Curly and the only one that really cared about him." Although his health continued to decline after the marriage, Valerie gave birth to a daughter, Janie, in 1948.

Later that year, Curly suffered a second massive stroke, which left him partially paralyzed. He used a wheelchair by 1950 and was fed boiled rice and apples as part of his diet to reduce his weight. Curly's condition failed to improve. Valerie admitted him into the Motion Picture Country House and Hospital on August 29, 1950. After several months of treatment and medical tests, Curly was released, though he would return periodically up until his death. 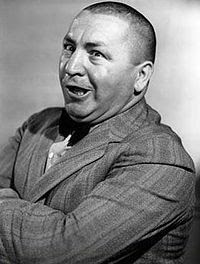 In February 1951, Curly was placed in a nursing home where he suffered another stroke a month later. In April, he took up residence at the North Hollywood Hospital and Sanitarium.

On January 7, 1952, Moe was contacted on the Columbia set while filming He Cooked His Goose to assist in moving Curly for what would be the last time. Eleven days later, on January 18, Curly died of a massive cerebral hemorrhage; he was 48.
Posted by David Lobosco at 7:04 AM