MOVIE SHOWCASE: OF MICE AND MEN 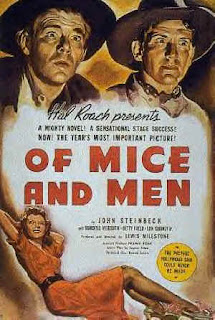 1939 was an epic year for the American cinema. So many top notch performances were given in that year, it is a shame that the movie industry of today is not looking back at what was done right in 1939. One movie released in 1939 that had everything going for it was OF MICE AND MEN. The film was based on the novella of the same title by American author John Steinbeck. It stars Burgess Meredith, Betty Field, Lon Chaney, Jr., Charles Bickford, Roman Bohnen, Bob Steele and Noah Beery, Jr. It was unfortunately remade in 1992.

The film tells the story of how the lead characters, George and Lennie, try to pursue their dream of owning their own ranch instead of working always for other people.

The film, produced by the Hal Roach Studios, was adapted by Eugene Solow and directed by Lewis Milestone. It was nominated for four Oscars. The musical score was by American composer Aaron Copland.

Two migrant field workers in California during the Great Depression—George Milton (Burgess Meredith), an intelligent and cynical man, and Lennie Small (Lon Chaney, Jr.), an ironically-named man of large stature and immense strength but limited mental abilities—come to a ranch near Soledad southeast of Salinas, California to "work up a stake." They hope to one day attain their shared dream of settling down on their own piece of land. Lennie's part of the dream, which he never tires of hearing George describe, is merely to tend to (and touch) soft rabbits on the farm. George protects Lennie at the beginning by telling him that if Lennie gets into trouble George won't let him "tend them rabbits." They are fleeing from their previous employment in Weed where they were run out of town after Lennie's love of stroking soft things resulted in an accusation of attempted rape when he touched a young woman's dress. 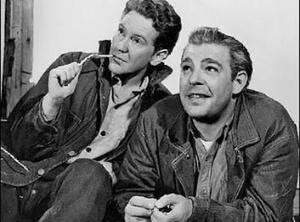 At the ranch, the dream appears to move closer to reality. Candy (Roman Bohnen), the aged, one-handed ranch-hand, even offers to pitch in with Lennie and George so they can buy the farm by the end of the month. The dream crashes when Lennie accidentally kills the young and attractive wife (Betty Field) of Curley (Bob Steele), the ranch owner's son, while trying to stroke her hair. A lynch mob led by Curley gathers. George, realizing he is doomed to a life of loneliness and despair like the rest of the migrant workers and wanting to spare Lennie a painful death at the hands of the vengeful and violent Curley, shoots Lennie in the back of the head before the mob can find him after George gives him one last retelling of their dream of owning their own land. 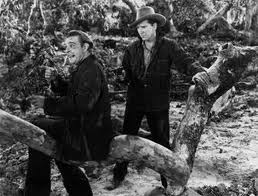 When the film was first released Frank S. Nugent, the film critic of The New York Times praised the film and the acting, writing, "And New York, unless we have miscalculated again, will endorse its film version, at the Roxy, as heartily as it has endorsed the film of the Joads. The pictures have little in common as narrative, but they have much in common as art; the same deft handling of their material, the same understanding of people, the same ability to focus interest sharply and reward it with honest craftsmanship and skill...No small share of that credit belongs to the men and the one young woman Hal Roach has recruited for his production. Miss Field has added stature to the role of the foreman's wife by relieving her of the play's box-office-conscious order that she behave like a hoyden.

The staff at Variety magazine also reviewed the film favorably, writing, "Under skillful directorial guidance of Lewis Milestone, the picture retains all of the forceful and poignant drama of John Steinbeck's original play and novel, in presenting the strange palship and eventual tragedy of the two California ranch itinerants. In transferring the story to the screen, scripter Eugene Solow eliminated the strong language and forthright profanity. Despite this requirement for the Hays whitewash squad, Solow and Milestone retain all of the virility of the piece in its original form."

The 1939 classic was was nominated for four Oscars, including Best Picture, Best Sound Recording, Best Musical Score, and Best Original Score, but it did not win a single award. The movie is some 72 years old, but for the acting of Burgess Meredith and Lon Chaney Jr alone it is worth dusting off this old movie, making some popcorn, and enjoying a truly great movie of classic cinema...

Posted by David Lobosco at 5:32 AM