LOU COSTELLO AND HIS TRAGEDY

I grew up watching the movies of Bud Abbott and Lou Costello. Their antics in their old movies are still timeless, and generations of film lovers still watch them. Growing up watching them, I never realized that beyond the laughter there was also great personal tragedy...especially Lou Costello. Costello suffered a tragedy that no one should suffer.

In 1943, Costello and his family were living at 4124 Longridge Ave., in Sherman Oaks. On the afternoon of Nov. 4, 1943, while Costello was at NBC rehearsing for his first radio show in a year, his wife, Anne, had put their son, Lou "Butch" Costello Jr., in a playpen in the backyard. Anne Costello said she looked out and saw Butch in his playpen about 2:30 p.m. and when she looked out again a few moments later, he was gone.

"She pulled him from the water and screamed for help. Two neighbors, Mrs. Bert Gutterman and Mrs. William Holmes, rushed to her aid and Mrs. Gutterman began giving artificial respiration. Mrs. Holmes called for an inhalator and Firemen Alvin M. Hull and Paul S. Johnson worked over the boy for more than an hour before Dr. Vincent Kovner pronounced him dead."

Costello rushed home, arriving just as the firefighters were leaving. "Grief-stricken, he wandered to the swimming pool and stood looking at the pale blue waters for an hour until Dr. Kovner persuaded him to enter the home and rest," The Times said.

Although Jimmy Durante, Bob Hope, Mickey Rooney and Red Skelton volunteered to take his place, Costello insisted that the show must go on. He returned to the studio and did the radio show with Abbott and Lana Turner. At the end of the program, Costello rushed from the stage, his face streaked with tears. Then Abbott announced Butch Costello's death. 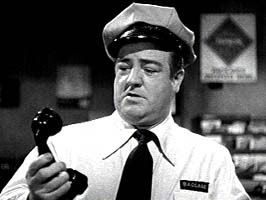 Here is how Lou Costello dealt with the tragedy in his own words (taken from a 1954 interview):

"The afternoon I went to final rehearsal, Ann gave me a present from Lou Jr. It was a gold identification bracelet. I put it on my wrist and it has never been off since that time. Kissing Ann goodbye, I said. "Have Lou listen to the broadcast and see if he recognizes my voice." Then I left my home feeling that I was mighty lucky man.

At the broadcasting station, Bud and I were in the midst of rehearsing a comedy routine when I was called to the telephone. Even now, thinking back to those moments at the telephone, I find it hard to keep back the tears, for I was told that my baby son was dead. He had fallen into the swimming pool and drowned.

I left the rehearsal in a daze and drove home. All the time I was thinking, "It's impossible." Only two hours ago the boy and I had been romping on the floor together. Now they said he was dead. I told myself, "It can't be true. There is some mistake." But when I arrived home, Ann in tears told me what had happened. I knew then that it was all too true - our son was dead.

After comforting my wife the best I could, I went back to the broadcasting station to do my radio show that night. Not because I was following the tradition of show business that "the show must go on." No, indeed. I wanted to do the radio show so that my voice would go out into the air, with the hope that Lou, Jr., might hear it wherever he was.

Again I asked myself, "Why did this have to happed to me?" This time I confess I found it difficult to keep my thoughts upon counting my blessings. The baby was constantly on my mind. Every little boy that I saw reminded me of the many things I had planned to do for my son. There was sadness in my heart. How I managed to be funny man in pictures and on the radio, I will never know.

Then gradually, as the time passed, I began to realize that though I had been deprived of doing things for Lou, Jr., there still were a lot of children in the world I could help. So Bud Abbott and I created the Lou Costello, Jr., Youth Foundation, for underprivileged children. Its facilities include libraries, medical clinics, gymnasiums and play grounds.

Each and every child meant something to us. At Christmas time we didn't just bring a lot of toys to the Foundation. Instead, weeks before the holidays, we visited each child and asked him what he or she wanted for Christmas. Whatever they requested, within reason, was there for them under the tree on Christmas.

Here again I learned another prescription for sorrow. By giving myself to these underprivileged children, I found happiness again."

Despite what Lou said in that 1954 interview, he never fully recovered from the loss. The team of Abbott and Costello officially broke up in 1957. Costello made one solo movie, before passing away from a heart attack in 1959 at the age of 52. His wife Anne died a few months later at the age of 47. It is so sad that Lou Costello gave laughter and enjoyment to millions and yet his own life was full of sadness and tragedy...
Posted by David Lobosco at 4:25 AM