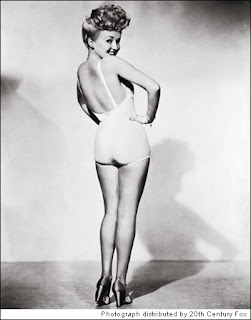 Betty Grable's iconic bathing suit photo made her the number-one pin-up girl of the World War II era. It was later included in the LIFE magazine project "100 Photos that Changed the World". Grable was particularly noted for having the most beautiful legs in Hollywood and studio publicity widely dispersed photos featuring them. Hosiery specialists of the era often noted the ideal proportions of her legs as: thigh (18.5") calf (12"), and ankle (7.5"). Grable's legs were famously insured by her studio for $1,000,000 with Lloyds of London.

She was born Elizabeth Ruth Grable in St. Louis, Missouri to John Conn Grable (1883–1954) and Lillian Rose Hofmann (1889–1964). She was the youngest of three children. Most of Grable's immediate ancestors were American, but her distant heritage was of Dutch, Irish, German and English stock. She was propelled into the acting profession by her mother. For her first role, as a chorus girl in the film Happy Days (1929), Grable was only 12 years old (legally underage for acting), but, because the chorus line performed in blackface, it was difficult to tell how old she was. Her mother soon gave her a make-over which included dyeing her hair platinum blonde.

For her next film, her mother got her a contract using a false identification. When this deception was discovered, however, Grable was fired. Grable finally obtained a role as a 'Goldwyn Girl' in Whoopee! (1930), starring Eddie Cantor. Though Grable received no billing, she led the opening number, "Cowboys." Grable then worked in small roles at different studios for the rest of the decade, including the Academy Award-winning The Gay Divorcee (1934), starring Fred Astaire and Ginger Rogers, where she was prominently featured in the number "Let's K-nock K-nees".

After small parts in over 50 Hollywood movies through the 1930s, Grable finally gained national attention for her stage role in the Cole Porter Broadway hit Du Barry Was a Lady (1939). When her contract at Paramount expired, Grable decided to quit acting, being fed up with appearing in college films.

In a 1940 interview, she said that she was "sick and tired" of show business and had decided to retire, but changed her mind - she received an unsolicited offer to go on a personal appearance tour, which she accepted and which led to Darryl F. Zanuck offering her a bigger contract, which she accepted, and which was followed by a part in Buddy DeSylva's Broadway show Du Barry Was a Lady and a part replacing the suddenly ill Alice Faye in Down Argentine Way. "If that's not luck I don't know what you'd call it" Grable said. "I've had contracts with four studios in 10 years and each time I left one or was dropped, I stepped into something better." 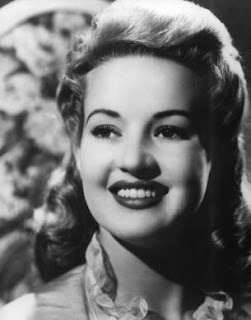 Grable's famous pin-up.Grable became 20th Century Fox's top star during the decade. She appeared in Technicolor movies such as Down Argentine Way (1940), Moon Over Miami (1941) (both with Don Ameche), Springtime in The Rockies (1942), Coney Island (1943) with George Montgomery, Sweet Rosie O'Grady (1943) with Robert Young, Pin Up Girl (1944), Diamond Horseshoe (1945) with Dick Haymes, The Dolly Sisters (1945) with John Payne and June Haver. Mother Wore Tights (1947), her most popular film, was with her favorite costar, Dan Dailey.

Starting in 1942, Grable was named in the top 10 box office draws for 10 consecutive years. For eight of those ten years, she was the top female-box office star. In 1943, she was named the #1 movie box office attraction. By the end of the 1940s Grable was the highest-paid female star in Hollywood, receiving $300,000 a year. During the 1940s and early 1950s, thirty Fox films were among the top ten highest grossing films of the year. Of those, ten were movies featuring Grable; eight of those movies were Fox's highest grossing pictures for their respective years. 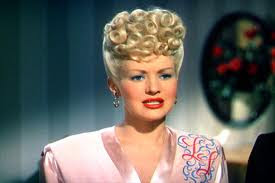 Her postwar musicals included: That Lady in Ermine (1948) with Douglas Fairbanks Jr., When My Baby Smiles at Me (1948) again with Dailey, Wabash Avenue (1950) (a remake of Grable's own Coney Island) with Victor Mature, My Blue Heaven (1950), and Meet Me After the Show (1951). Studio chief Darryl F. Zanuck lavished his star with expensive Technicolor films, but also kept her busy — Grable made nearly 25 musicals and comedies in 13 years. Her last big hit for Fox was How to Marry a Millionaire (1953) with Lauren Bacall and Marilyn Monroe. Grable next starred in Three for the Show (1955) with Jack Lemmon; this film was one of her last musicals.

Grable's later career was marked by feuds with studio heads. At one point, in the middle of a fight with Zanuck, she tore up her contract and stormed out of his office. By 1953, Zanuck was grooming Marilyn Monroe to replace Grable as the Fox's resident sex symbol. Far from feeling threatened, on the set of How to Marry a Millionaire Grable famously said to Monroe, "go and get yours, honey! I've had mine". It was at this point that Grable lost her father 'Conn' Grable in 1954, at age 71.

Grable returned to the studio for one last film, How to Be Very, Very Popular (1955) with Sheree North. Following this, Grable hoped to secure the role of Miss Adelaide in the film version of the musical Guys and Dolls. However, when producer Samuel Goldwyn learned that Grable skipped a meeting with him because one of her dogs had taken ill, he became incensed and removed her from consideration. Vivian Blaine, who had originated the role on Broadway, was ultimately cast.

Having left movies entirely, she made the transition to television and starred in Las Vegas. It was in these transition years to stage, when Betty lost her mother Lillian in 1964, at age 75. By 1967, she took over the lead in the touring company of Hello, Dolly!. She starred in a 1969 musical called Belle Starr in London, but it was savaged by critics and soon folded. 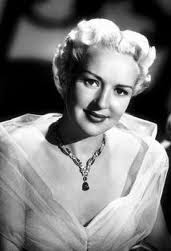 Grable's last role was Billie Dawn in Born Yesterday, at the Alhambra Dinner Theatre in Jacksonville, Florida in February 1973.

In 1943, she married trumpeter Harry James. The couple had two daughters, Victoria and Jessica. They endured a tumultuous 22-year marriage that was plagued by alcoholism and infidelity. The couple divorced in 1965. Grable entered into a relationship with a dancer, Bob Remick, several years her junior. Though they did not marry, their romance lasted until the end of Grable's life.

Grable died on July 2, 1973, of lung cancer at age 56 in Santa Monica, California. Her funeral was held July 5, 1973, 30 years to the day after her marriage to Harry James — who, in turn, died on what would have been his and Grable's 40th anniversary, July 5, 1983. She was interred in Inglewood Park Cemetery, in Inglewood, California.

Among the lumunaries attending her funeral were her ex-husband Harry James, Dorothy Lamour, Shirley Booth, Mitzi Gaynor, Johnnie Ray, Don Ameche, Cesar Romero, George Raft, Alice Faye and Dan Dailey. "I Had the Craziest Dream," the haunting ballad from Springtime in the Rockies, was played on the church organ. This song was introduced in the film by Helen Forrest...

Posted by David Lobosco at 7:47 AM