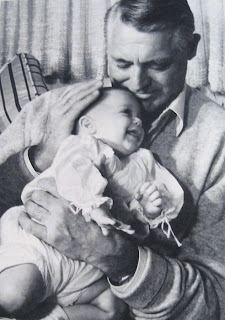 Cary Grant wanted a life away from the silver screen in 1966 after three decades of superstardom in such classics as "North by Northwest," "Gunga Din," "The Philadelphia Story" and "Bringing Up Baby." So Grant, then 62, gave up his career for what he felt would be the greatest role of his life: doting father.

"He retired to be with me," said his daughter, Jennifer Grant. "That is hard to believe in and of itself. He put all of his focus, really, on me. Most people don't have the luxury to retire; most people don't want until their 60s to have a child.'

The tall, whippet-slim Grant, now 45, looks a lot like her mother, Oscar-nominated actress Dyan Cannon, but possesses her father's dark hair and dancing eyes. Grant's parents divorced in 1968 when she was 2.

Grant, who followed in her parents' footsteps and acted in such projects as the original "Beverly Hills, 90210" and the short-lived sitcom "Movie Stars," has written a sweet memoir about her handsome, suave father, "Good Stuff: A Reminiscence of My Father, Cary Grant."

She says she waited nearly 25 years after his death at age 82 to write about her life with her dad.

"I was finally ready to share him," Grant said over lunch at the Polo Lounge. "It's taken me a long time to be able to let go." 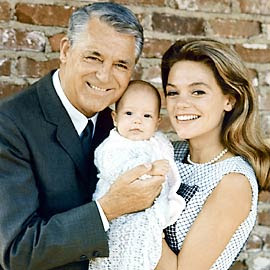 Cary Grant tape recorded their life together. The older Jennifer Grant got, the more they treated these recordings as a game. "At first, of course, I didn't know [what was going on]. There is a picture of me out on the patio when I was about 2 or 3, looking at the tape recorder and pretending to speak into the microphone."

Her father didn't listen to the recordings; he made them for Grant for when she was older. "I knew he might not be around forever," she said.

"There's boxes and boxes of stuff," said Grant, who named her toddler son after her father. "I didn't know quite how much until after he passed away."

Grant spent every other weekend with her father, as well as Mondays and half of vacations. If her mother was away on location making movies, she would stay with her father in Beverly Hills. But he would sneak in fleeting moments with her whenever he could. When Grant was in kindergarten at the Buckley School in Sherman Oaks, she would take the bus to school every morning from Beverly Hills.

Dad would park along the route," Grant said. "He would sit in the car and wait. We would just wave. It's pretty far-out stuff. But what people do know about him — how much energy, charisma, warmth and wit — he translated all of that into fatherhood."

Grant and her father enjoyed going to dude ranches. "He wanted to take me places, but the difficulty is if you are Cary Grant, you walk in and the whole word turns and your time becomes dealing with everybody. So we had to find spots where we would have enough privacy. With dude ranches, there are maybe 30 people at a time, so you could get the Cary Grant factor out fast and then you could enjoy your week of riding and being together."

Of course, Grant and her father did have squabbles. When he got mad, "it was like a very gray day." His voice, Grant recalled, "was very deep and very slow. He would just give me three-word answers."

When she was home from Stanford, her curfew was 11:30 p.m. because he worried about her. "He and Barbara [fifth wife Barbara Harris] would leave the hall door open, and I would just say, 'I'm home.' He would say, 'Thank you, darling. See you in the morning.' I was very rarely late. I didn't want him to worry." 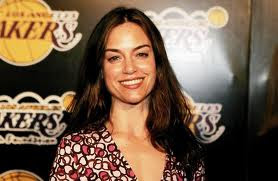