MY WIFE HATES THE MUSIC MAN 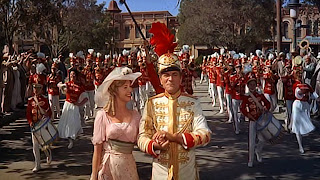 When I was in the 7th grade, we had a teacher who spent the whole first semester studying and looking at the musical The Music Man. We studied the Broadway show of the 1950s as well as the 1961 movie. As a result, the movie version has always been one of my all-time favorite musicals. It was on recently on Turner Classic Movies, and my dear wife nearly passed out. My wife is wonderfully supported of me and my hobbies. Together we have watched old Bing Crosby musicals from the 1930s as well as odd movies such as Xanadu (1981), but for some reason my wife has a deep hatred for The Music Man. After she nearly poked out her eyes and eardrums last night while I watched part of the film, I asked her why she dislikes the movie so much.

Firstly, my little lady does not like Robert Preston in that role as Professor Harold Hill. I explained to her that Preston was a great actor of the 1940s and 1950s, and originated the role of Hill on Broadway. My wife thought Robert Preston was too old to be going after a young librarian (Shirley Jones). Preston was 43 and Jones was 27 when the film was made. There have been longer age differences in leading men and leading ladies, and I feel that Preston looked younger than his age. My wife thinks he looks more like her father. When they were casting the movie, Bing Crosby's name came up briefly as playing Harold Hill. I love Bing but he was born in 1903!

My wife can not stand the singing of Robert Preston. She states profusely that Preston had not right to sing. Again, I told her that Bing Crosby was considered for the part, and she stated "at least he can sing!". While on the topic of the singing and the music, my wife did not care for the score as well. She says that all of the songs with maybe the exception of "Til There Was You" were just spoken songs. The only number worth watching in her opinion was "Shipoopi". Although Buddy Hackett was another "non-singer", she thought the number was fun at least.

I tried to get her to say something positive about a musical that means a great deal to me, and other than Shirley Jones and the "Shipoopi" number, I can not get anything more out of her. My wife has a hatred for The Music Man more than River City had for salesmen - even played by Robert Preston. I love The Music Man, but I love my wife more - so I'll probably be watching the goings on at River City in the twilight hours of night from now on! 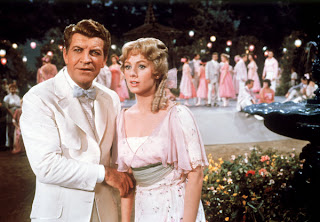