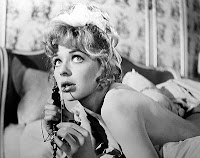 LONDON – British actress Susannah York, one of the leading stars of British and Hollywood films in the late 1960s and early 1970s, has died in London at the age of 72.

York died of cancer Saturday at the Royal Marsden Hospital in London.

Her son, the actor Orlando Wells, said York was an incredibly brave woman who did not complain about her illness and a "truly wonderful mother." He said she went into the hospital on Jan. 6 after experiencing shoulder pain.

York had a long, distinguished career on film, television and on stage, but she is best remembered for her early roles, when she had an immediate impact that started with her 1963 role as Albert Finney's love interest in the memorable period piece romp "Tom Jones."

With its tongue-in-cheek sensuality and gentle sendup of the British aristocracy, the film is remembered as an early landmark in '60s cinema, and York's unmistakable presence added to its appeal. Her long blond hair, stunning blue eyes and quick-witted repartee brought her a string of excellent roles.

York was nominated for an Oscar for the 1969 classic "They Shoot Horses, Don't They?" and also starred in "A Man for All Seasons" and other classic films from that era.

She acted with major stars like Sean Connery, Elizabeth Taylor, Marlon Brando, George C. Scott and many others, stirring some controversy with her daring portrayal of a lesbian in the 1968 drama "The Killing of Sister George."

In 1972 York won the Best Actress award at the Cannes Film Festival. Her film work tailed off as London's "Swinging Sixties" era faded into cultural history, but she did play Superman's mother in several of the films.

She moved on to television and stage work, earning a number of accolades and awards throughout her long career. She made appearances in several successful TV shows including "The Love Boat" in the U.S. and "Holby City" in Britain.

Her stage work continued for much of her career and included several one-woman shows.

Wells said his mother was incredibly versatile throughout her working life.

"There was the glamorous Hollywood aspect — she has worked with everyone from John Huston to Sydney Pollack — as well as the big commercial films like Superman," he said.

Wells said his mother also had a passion for writing.

"She wrote two children's books, which is great for her grandchildren and something we will pass on to them," said Wells.

York was born in London and studied at the storied Royal Academy of Dramatic Art, which has tutored many of Britain's top actors throughout the years.

York had two children — son Orlando and daughter Sasha — with her husband, Michael Wells, before they divorced. She is survived by her children and several grandchildren.
Posted by David Lobosco at 4:55 AM