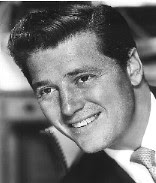 Gordon MacRae is best remembered for his Rodgers and Hammerstein movies of the 1950s, but I have been collecting his recordings for years now. As a performer and actor, he was excellent, but I feel that as a singer he was one of the best. MacRae never got the recognition he deserved for being an all around performer.

Born Albert Gordon MacRae in 1922 in East Orange, New Jersey, MacRae graduated from Deerfield Academy in 1940 and served as a navigator in the United States Army Air Forces during World War II. Prior to this, he attended Nottingham High School in Syracuse, NY.

He made his Broadway debut in the mid-1940s, acquiring his first recording contract soon afterwards. Many of his hit recordings were made with Jo Stafford. It was in 1948 that he appeared in his first film, The Big Punch, a drama about boxing. He soon began an on-screen partnership with Doris Day and appeared with her in several films.

In 1951, he starred with Doris Day in On Moonlight Bay, followed by the sequel By the Light of the Silvery Moon in 1953. That same year, he also starred opposite Kathryn Grayson in the third film version of The Desert Song. This was followed by leading roles in two major films of Rodgers and Hammerstein musicals, Oklahoma! (1955) and Carousel (1956), both movies opposite Shirley Jones.

On radio, he was the host and lead actor on The Railroad Hour, a one-hour anthology made up of condensed versions of hit Broadway musicals.

Thereafter, MacRae appeared on The Ed Sullivan Show, The Pat Boone Chevy Showroom, and The Bell Telephone Hour. He continued his musical stage career, often performing with his wife, as in a 1964 production of Bells Are Ringing, also performing as Sky Masterson in the popular musical Guys and Dolls, his wife playing the role of Miss Adeleide, reprising her Broadway role. In the late 1960s he co-hosted for a week on The Mike Douglas Show. He also toured in summer stock and appeared in nightclubs. In 1967, he replaced Robert Preston in the original Broadway run of the musical I Do! I Do!, starring opposite Carol Lawrence, who had taken over the role from Mary Martin.

In the 1970s, he portrayed a murderer on the popular TV series McCloud and played a supporting role in what turned out to be his last film, the 1979 motion picture The Pilot.

Suffering from many ailments in the 1980s, Gordon MacRae died in 1986 at Bryan Memorial Hospital in Lincoln, Nebraska, at the age of 64. He had been undergoing treatment for cancer of the mouth and jaw as well as pneumonia...
Posted by David Lobosco at 1:33 PM