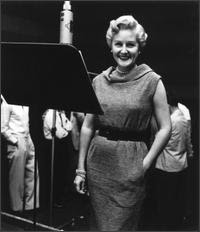 TRENTON, N.J. – As a songwriter's daughter and a singer who sold millions of records herself in the 1940s and '50s, Margaret Whiting knew what separated a good singer from a great one.

"Being a great actress, being very dramatic," she said in a 2001 interview. "Some people sing beautiful songs, but they don't put all the meaning into them, and that's the important thing. To read a lyric, to make the words come alive, that's the secret."

Whiting, a sweet-voiced performer known for sentimental ballads such as "Moonlight in Vermont" and "It Might as Well Be Spring," died Monday at the Lillian Booth Actors' Home in Englewood, N.J., home administrator Jordan Strohl said. She was 86. She had lived in New York City for many years before moving to the home in March.

As the daughter of Richard Whiting, a prolific composer of such hits as "My Ideal," "Sleepy Time Gal" and "Beyond the Blue Horizon," Whiting grew up with the music business. She began singing at a young age, and her career almost seemed predetermined.

Born in Detroit on July 22, 1924, Whiting moved with her family to Los Angeles after musicals became the rage and her father headed west to write for them. He turned out songs for Maurice Chevalier and Bing Crosby while at Paramount and composed "Hooray for Hollywood" and "Too Marvelous for Words" for Warner Bros.

And on at least one occasion, his daughter provided him with unexpected inspiration.

In 2000, Whiting recalled how she came home from school one day with an all-day lollipop while her father was trying to write a song for a Shirley Temple movie. At first he was annoyed by the sticky kisses, but then inspiration struck.

He called lyricist Sidney Clare and said, "How about 'The Good Ship Lollipop' for Shirley?"

The Whiting family's home in the posh Bel-Air community in Los Angeles was often a gathering place for such songwriters as George and Ira Gershwin, Frank Loesser, Jerome Kern, Harold Arlen and Johnny Mercer. And as Whiting grew, her father's friends took note of her talents as a singer and encouraged her to perfect her craft.

Among them was Mercer, her father's lyricist and close friend, who inspired the young Whiting to take years of vocal training when he told her following an early audition, "Grow up and learn to sing." And when Mercer became a founding partner in Capitol Records in 1942, the 18-year-old Whiting was the first singer he put under contract.

It was Mercer who had coached the teenage Whiting through her first recording, of her father's "My Ideal," and although Chevalier and Frank Sinatra had already recorded the tune, her version sold well.

She followed it with a remarkable procession of million sellers: "That Old Black Magic," "It Might as Well Be Spring," "Come Rain or Come Shine" and her biggest seller and signature song, "Moonlight in Vermont."

Like most recording stars of the 1940s and early '50s, her career was eclipsed by the rock 'n' roll revolution, although she continued to find work in such Broadway productions as "Pal Joey," "Gypsy" and "Call Me Madam."

She also toured regularly with the big bands of Freddy Martin, Frankie Carle and Bob Crosby and sang in cabarets, in auditoriums and with the St. Louis Symphony. With Rosemary Clooney, Helen O'Connell and Rose Marie, she crossed the country in a revue called "4 Girls 4."

In all, she recorded more than 500 songs during her career and was one of the first mainstream artists to delve into Nashville, Tenn., combining with country star Jimmy Wakely on the hit "Slippin' Around." She also recorded rock, novelty and sacred songs and continued touring as late as the 1990s.

When asked about their relationship, Wrangler told the Chicago Tribune they "see things the same way, comically, professionally and romantically." After meeting Whiting, Wrangler turned his attention to theater and cabaret, crafting her cabaret acts and several shows. Their marriage lasted until his death in 2009.
Posted by David Lobosco at 5:24 AM