SPOTLIGHT ON THE NICHOLAS BROTHERS 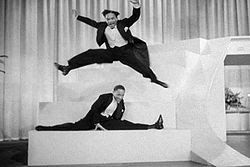 Fred Astaire and Gene Kelly are often called the greatest dancers of all-time and rightfully so. However, a dancing team that should not be overlooked are the Nicholas Brothers. The Nicholas Brothers were a famous team of dancing brothers, Fayard (1914–2006) and Harold (1921–2000). With their highly acrobatic technique ("flash dancing"), high level of artistry and daring innovations, they were considered by many the greatest tap dancers of their day. Growing up surrounded by Vaudeville acts as children, they became stars of the jazz circuit during the heyday of the Harlem Renaissance and went on to have successful careers performing on stage, film, and television well into the 1990s.

One of their signature moves was to dance down a huge flight of broad stairs, leapfrogging over each other and landing in a complete split on each step. This move was performed in the finale of their most famous performance, the movie Stormy Weather. Fred Astaire once told the brothers that the "Jumpin' Jive" dance number in Stormy Weather was the greatest movie musical sequence he had ever seen. In that famous routine, the Nicholas Brothers fearlessly and exuberantly leap across the music stands of the orchestra and dance on the top of a grand piano in a call and response act with the pianist.

One of their signature moves was a "no-hands" splits, where they went into the splits and returned to their feet without using their hands. Gregory Hines declared that if their biography was ever filmed, their dance numbers would have to be computer generated because no one could duplicate them. Ballet legend Mikhail Baryshnikov once called them the most amazing dancers he had ever seen in his life.

The Nicholas Brothers taught master classes in tap dance as teachers-in-residence at Harvard University and Radcliffe as Ruth Page Visiting Artists. Among their known students are Debbie Allen, Janet Jackson, and Michael Jackson. Several of today's master tap dancers have performed with or been taught by the brothers.

Harold died July 3, 2000 of a heart attack following minor surgery. Fayard died on January 24, 2006 of pneumonia after having a stroke. Despite the racisim in America in the 1930s and 1940s, the Nicholas Brothers seemed to overcome that with their unbelievable dancing ability. They should be remembered along with the other great dancers and entertainers of the golden age of the American musical...
Posted by David Lobosco at 4:20 AM