MOVIE REVIEW: SHADOW OF A DOUBT 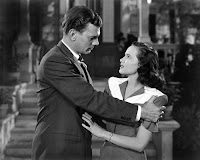 When I first saw the classic SHADOW OF A DOUBT when I was younger, I did not realize it was an Alfred Hitchcock movie. The movie, made in 1943, was unlike any movie Hitchcock had done before or for that matter after. It was Hitchcock's only "purely American" movie, and the movie was years ahead of itself in suspense, intrigue, and dialogue. While many films of the day were musicals about how the boy gets the girl, SHADOW OF A DOUBT truly is a film that has not aged much. Some 67 years after its release the film is still quite watchable and the suspense is more riveting than any 3D or special effects movie.

Starring Joseph Cotten, Teresa Wright, and MacDonald Carey, SHADOW OF A DOUBT was one of Joseph Cotten's finest roles. Alfred Hitchcock appears about 15 minutes into the film, on the train to Santa Rosa, playing bridge with a man and a woman (Dr and Mrs. Harry). Charlie Oakley is traveling on the train under the assumed name of Otis. Mrs. Harry is eager to help Otis, who is feigning illness in order to avoid meeting fellow passengers, but Dr. Harry is not interested and keeps playing bridge. Hitchcock on his part seems surprised to see that he has somehow been dealt a full suite of spades, a Grand Slam bridge hand.

The plot centers around a bored teenager living in Santa Rosa, California, Charlotte "Charlie" Newton (Wright). She is frustrated because nothing seems to be happening in her life and that of her family. Then, she receives wonderful news: her uncle (for whom she was named), Charlie Oakley (Cotten), her mother's brother, is arriving for a visit.

Two men show up pretending to be photographers and journalists working on a national survey of the average American family. One of them speaks to Charlie privately, identifying himself as Detective Jack Graham (Macdonald Carey) and telling her that her uncle is one of two men who are suspected of being a serial killer known as the "Merry Widow Murderer". This murderer has a modus operandi of seducing, murdering and robbing wealthy widows.

Young Charlie at first refuses to even consider that her uncle could be a murderer, but she cannot help noticing him acting strangely on several occasions. She confirms her suspicions after seeing the initials on the engraving on the ring Uncle Charlie gave her match one of the recent victims of the killer. Particularly chilling is a family dinner conversation during which Uncle Charlie reveals his hatred of rich widows, comparing them to fat animals deserving of slaughter.

Young Charlie's growing suspicion soon becomes apparent to her uncle. He confronts her and admits that he is indeed the man the police are after. He begs her for help; she reluctantly agrees not to say anything, as long as he leaves soon, to avoid a horrible scandal in the town that would destroy her family, especially her mother, who idolizes her younger brother.

Then news breaks that the second suspect was killed fleeing from the police in Portland, Maine, and is assumed to have been the guilty one. The detective Graham leaves after telling Young Charlie that he loves her and would like to marry her someday. Uncle Charlie is delighted at first, until he remembers that Young Charlie fully knows his secret. Soon, the young woman has a couple of near fatal "accidents", falling down some very steep stairs at her home, and being trapped in a closed garage with a car spewing exhaust fumes. 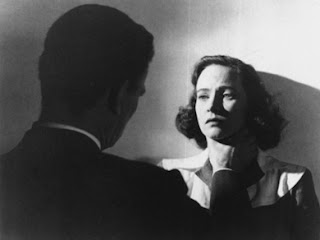 Uncle Charlie soon announces that he is leaving by train for San Francisco, following what is presumably his next victim. As he departs, he contrives for young Charlie to stay on board, planning to kill her by pushing her off as soon as the train gets up to speed. Instead, in the ensuing struggle between them, he falls into the path of an oncoming train. At his funeral Uncle Charlie is highly honored by the townspeople of Santa Rosa, who know nothing of his crimes. Jack has come back to comfort Charlie; she tells him she had withheld from him information about her uncle which would have confirmed him as the murderer, but Jack already knows and accepts that, realizing her difficult situation. They become a couple, and resolve to keep Uncle Charlie's crimes a secret.

Posted by David Lobosco at 4:32 PM