REMEMBERING THE FUNERAL OF JUDY GARLAND

This appeared in the New York Times the day after Judy's funeral. Judy Garland's funeral was on June 27, 1969... 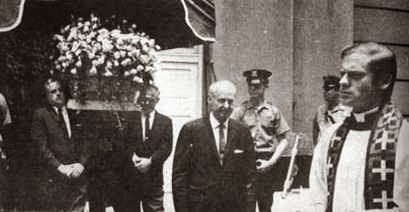 Judy Garland's Funeral Draws Her Colleagues
While legions of her fans maintained an ardent vigil in the hot and humid streets, colleagues of Judy Garland bade her farewell yesterday in a swift, simple service at the Frank E. Campbell Funeral Home. "Judy's great gift," James Mason said in his eulogy, "was that she could wring tears out of hearts of rock." But there were few tears and seats to spare yesterday in the flower-bedecked room where an estimated 20,000 people had paused between noon Wednesday and 11 A.M. yesterday to peer into the glass-enclosed coffin of their favorite. "She gave so richly and so generously," said Mr. Mason, who had played opposite Miss Garland in "A Star Is Born," "that there was no currency in which to repay her."

Waiting for celebrities outside, pressed against gray police stanchions barring them from the chapel at 81st Street and Madison Avenue, a crowd estimated at 1,300 to 1,500, waited for a renewed glimpse of the celebrities.  From the ranks of show business were Ray Bolger, who played the Scarecrow to Miss Garland's Dorothy in "The Wizard of Oz," and Lauren Bacall, Alan King, Betty Comden and Adolph Green, Johnny Mercer, Paula Wayne, Fred Ebb, Freddie Bartholomew, Otto Preminger and Spyros Skouras; and Harold Arlen, who wrote the song most closely associated with Miss Garland: "Over the Rainbow." Also in attendance were fellow entertainers Frank Sinatra and Bing Crosby, who reportedly helped to pay for the cost of Garland's funeral. Mickey Rooney, who co-starred with Miss Garland in the Andy Hardy films when both were young, appeared briefly at the funeral home, evoking gasps and cheers from the spectators. He was not among the 200 people who remained for the service.

Mayor and Mrs. Lindsay were among the guests, as was Mrs. Patricia Kennedy Lawford.Present, too, were Miss Garland's children, Liza Minnelli and Lorna and Joseph Luft, and Sid Luft, her third husband, and Mickey Deans, her fifth, whom the 47-year-old star married in March.The Rev. Peter A. Delaney of Marylebone Church, London, who officiated at Miss Garland's marriage to Mr. Deans, conducted the 20-minute Episcopal service. 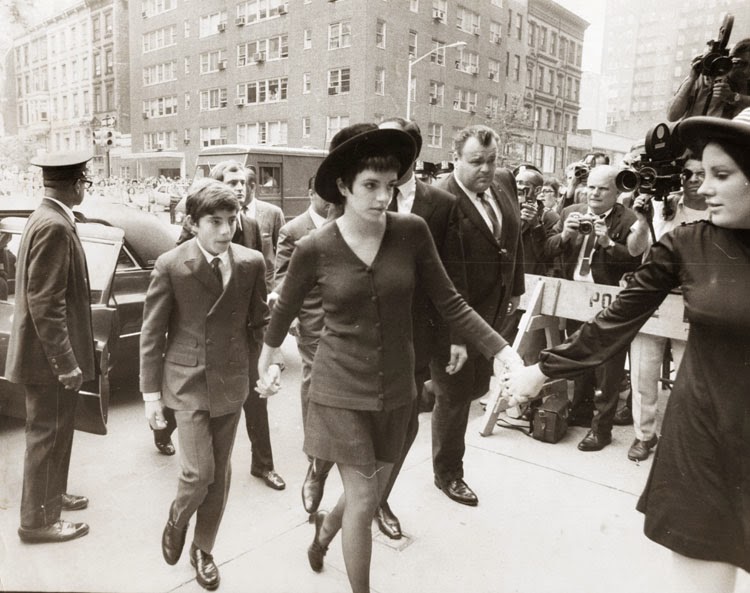 In a departure from custom, friends of the family reported, the service included a reading from one of Miss Garland's favorite Bible passages, I Corinthians, xiii, which begins: "Though I speak with the tongues of men and of angels, and have not charity, I am become as sounding brass, or a tinkling cymbal." Although the press was barred from the actual service, portions of the funeral, including Mr. Mason's eulogy, were audible through a loudspeaker provided by Campbell's in an upstairs room. In 1926, the same concern handles the funeral of Rudolph Valentino, whose death led to a massive display of grief from a desolate public that thronged to the Campbell chapel, then at Broadway and 66th Street. Lois Smith, Miss Minnelli's public relations representative, said that the service yesterday had been intended by Miss Minnelli to convey a "feeling of joy."

Jack French, Miss Garland's musical accompanist, began the funeral with an organ rendition of one of Miss Garland's favorite songs, "Here's to Us," from the Broadway production "Little Me."He ended the service with "The Battle Hymn of the Republic," which the mourners sang. Then, the coffin containing the body of Miss Garland, who died last Sunday in London of an apparently accidental overdose of sleeping pills, was placed in a waiting hearse that headed a cortege of three limousines and a flower car. Under a blanket of yellow roses, the coffin was taken to Ferncliff Cemetery in Hartsdale, N.Y. There it was placed in a crypt where it will remain until a mausoleum is built. Several hundred people were awaiting the arrival of the coffin, and when they lingered about the crypt long after the coffin was emplaced, a policeman told them: "The funeral of Judy Garland is over. We would appreciate you leaving." On Madison Avenue, where the crowd had surged through the barricades as the funeral ended, a few of Miss Garland's fans, clutching flowers, still clustered. "I have nothing else to do right now," said one. 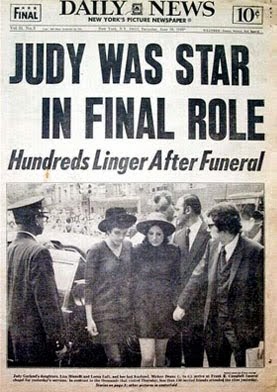 SOURCE
Posted by David Lobosco at 6:01 AM