THE CHILDREN OF CHARLIE CHAPLIN 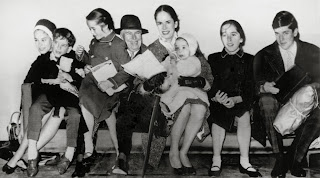 Doing research on comedians, I discovered that a lot of them adopted their children like Jack Benny, George Burns, and Bob Hope. However, I was always amazed at how many children Charlie Chaplin had. He had 11 children between 1919 and 1962. It was an amazing record, and knowing how much of a genius Chaplin was at everything else, it only goes to show he was a genius at having children as well. Here is a run down of his children:

Charles Spencer Chaplin, Jr. was born May 5, 1925. Charlie's Jr. was in Limelight (1952) as one of the clowns with his father. As young children, he and his brother were used as pawns in their mother's bitter divorce from Charlie Chaplin, during which a lot of the couple's "dirty linen" was aired in sensational—and very public—divorce hearings. Following the divorce, the young brothers were raised by their mother and maternal grandmother until the mid-1930s, when they began to make frequent visits to their father. He is burried next to his maternal grandmother Lillian Grey (1889-1985).

Sydney Earle Chaplin was born March 30th, 1926. Sydney played with his father in Limelight in the role as Neville. In 1957 he won Tony Award for Best Performance by a Featured Actor in a Musical for Bells Are Ringing, opposite Judy Holliday, and received a Tony nomination for his performance as Nicky Arnstein, the gambling first husband of Fanny Brice, opposite Barbra Streisand, in the Broadway musical Funny Girl in 1964.Until he died, he still attended Chaplin events held for his father and can be seen in many film interviews about Charlie. Sydney died March 3, 2009.

Geraldine Leigh Chaplin was born August 1, 1944. Geraldine was an actress known for many roles, but first recognized for her work in Dr. Zhivago. She also played her own grandmother in the 1992 Richard Attenborough film of Chaplin. Her first film appearance was in Limelight with brother Michael and sister Josephine at the beginning of the film.

Michael John Chaplin was born March 7, 1946 He appeared in Limelight with his sisters in the beginning and played the boy 'Rupert Macabee' in King of New York. 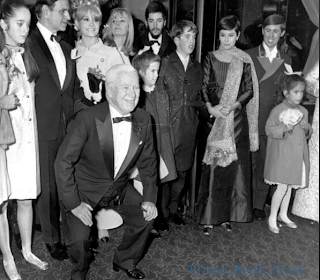 Josephine Hannah Chaplin was born March 28, 1949. She has been in a number of films, including her father's Limelight and A Countess from Hong Kong, and Pasolini´s Canterbury Tales. She had a son Julien Ronet (born 1980) by Maurice Ronet, with whom she lived until his death.

Victoria Chaplin was born May 19, 1951. Chaplin was born in the United States but grew up in Switzerland. As a teenager, she appeared as an extra in her father's last film, A Countess from Hong Kong (1967). Her father also wanted her to star in the main role of a winged girl found from the Amazonian rainforest in his next planned film, The Freak, in 1969. However, the project was never filmed because of his declining health and because Chaplin eloped with the French actor Jean-Baptiste Thiérrée.

Eugene Anthony Chaplin was born August 23, 1953. He is a Swiss recording engineer and documentary filmmaker. He is the president of the International Comedy Film Festival of Vevey, Switzerland. He directed the documentary film Charlie Chaplin: A Family Tribute produced by Jarl Ale de Basseville and created the musical "Smile", which is a narration of Charlie Chaplin's life through his music. As a recording engineer, he worked with The Rolling Stones, David Bowie, and Queen. 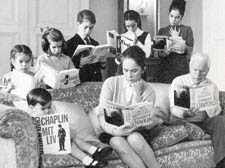 Jane Cecil Chaplin was born May 23, 1957 and married film producer Ilya Salkind. She has two children.

Annette Emily Chaplin was born December 3, 1959 and is the most private of all of the Chaplin children.

Christopher James Chaplin was born July 6 1962 in Corsier-sur-Vevey, Switzerland. Christopher is a composer and actor. He is the youngest son of film comedian Charlie Chaplin and his fourth wife, Oona O'Neill.

What also is so remarkable is that the Chaplin children did not seem to fall into the pitfalls that the children of other legends have. They all are talented and seemingly well adjusted children. His children may be Charlie Chaplin's most remarkable body of work...