WHAT A CHARACTER: FRANCES BAVIER 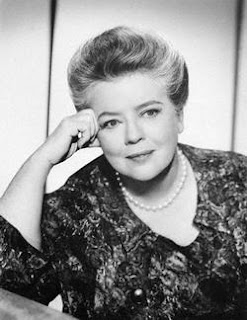 I was not even born when the legendary television series "The Andy Griffith Show" first aired. However, reruns of the landmark show were a big part of my childhood. There was something appealing and heartwarming about the little town of Mayberry on the show. (Even though there was never anyone other than white people in the town!)

With the death of the show's namesake, Andy Griffith, I have rediscovered the show. The characters and the actors that played them made the show from Andy Griffith to Ron Howard to Don Knotts. Not to be forgotten is the great Aunt Bee - played to countryspun perfection by actress Frances Bavier. Bavier was a complex woman who was much different than her easy going character on television.

Born in New York City in 1902, Bavier attended Columbia University and the American Academy of Dramatic Arts before embarking on a career in acting. She first appeared in vaudeville, later moving to the Broadway stage. Bavier had roles in more than a dozen films, as well as having played a range of supporting roles on television. Career highlights include the play Point of No Return, alongside Henry Fonda, and her turn as Mrs. Barley in the classic 1951 film The Day the Earth Stood Still. In 1957 she played Nora Martin, mother to Eve Arden in the short-lived series The Eve Arden Show. 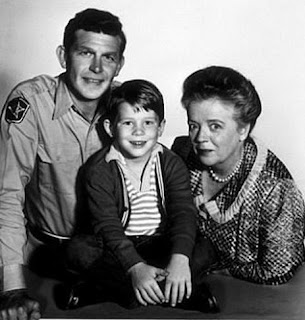 Bavier had a love-hate relationship with her most famous role, Aunt Bee, during The Andy Griffith Show. As a New York actress, she felt her dramatic talents were being overlooked. At the same time, she played Aunt Bee for eight seasons and was the only original cast member to remain with the series in the spin-off Mayberry R.F.D., staying two additional seasons. In contrast to her affable character Aunt Bee, Bavier was easily slighted and the production staff would often appease her by "walking on eggshells." She won the Primetime Emmy Award Outstanding Performance by an Actress in a Supporting Role in a Comedy in 1967. Series star Andy Griffith addressed the fact that the two sometimes clashed during the series' run. According to Griffith (Larry King Live, April 24, 1998), Bavier phoned him four months before she died, and said she was deeply sorry for being "difficult" during the series' run.

In 1972, Bavier retired from acting and bought a home in Siler City, North Carolina. On choosing to live in North Carolina instead of her native New York, Bavier stated in an interview that, "I fell in love with North Carolina, all the pretty roads and the trees." She briefly returned to acting in 1974 in the family film Benji. Bavier never married or had children. Seemingly awkward in one-on-one relationships, she seemed to be charitable to the needs of organizations and fans.According to a 1981 article by Chip Womick, a staff writer of The Courier Tribune, Bavier enthusiastically promoted Christmas and Easter Seal Societies from her Siler City home, and often wrote inspirational letters to fans who sought autographs. Overly zealous fans however, often invaded both her property and privacy, and Bavier became reclusive.

Bavier's medical condition prevented her from taking part in the 1986 television movie Return to Mayberry.

Frances Bavier had been a fan of Studebaker cars since the thirties. In Mayberry R.F.D., she drove her own 1966 Daytona 2 door Sports Sedan (which was the last model of the South Bend factory, though produced in Canada from 1964 to 1966). She kept this car in perfect state while alive and refused to purchase a new car when her driver suggested it. As her health failed it sat idle in her garage and was found with four flat tires, and a ruined interior from her many cats. . It was auctioned for $20,000 one year after her death, and is still in the same condition as it was found. The new owners felt if it was restored, then it would no longer be Aunt Bee's Studebaker. She was also a member of the Studebakers Drivers Club.

On November 22, 1989, Bavier was admitted to Chatham Hospital. She was suffering from both heart disease and cancer and was kept in the coronary care unit for two weeks. She was discharged on December 4, 1989, and died at her home two days later of a heart attack. Bavier is interred at Oakwood Cemetery in Siler City. Her headstone includes the name of her most famous role, "Aunt Bee" and reads, "To live in the hearts of those left behind is not to die"... 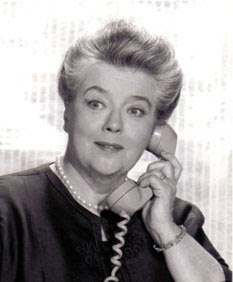