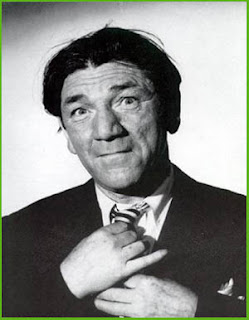 Last year I wrote three articles on the Three Stooges. I wrote about the golden age of the Stooges with Moe, Larry, and Curly. However, another stooge who filled in after Curly got sick and late died, should not be forgotten. I consider himself a part time stooge and that is Shemp Howard.

Born on March 11, 1895 Shemp was eaised in Manhattan, New York. He was the third of the five Horwitz brothers and of Lithuanian Jewish ancestry. Shemp Howard, like many New York-based performers, found work at the Vitaphone studio in Brooklyn. Originally playing bit roles in Vitaphone's Roscoe Arbuckle comedies, showing off his goofy appearance, he was entrusted with speaking roles and supporting parts almost immediately.

He was featured with Vitaphone comics Jack Haley, Ben Blue, and Gus Shy, then co-starred with Harry Gribbon, Daphne Pollard, and Johnnie Berkes, and finally starred in his own two-reel comedies. (A 1934 Gribbon-Howard short, Art Trouble, also featured the then unknown James Stewart in his first film role.) Shemp would seldom stick to the script, and would liven up a scene with ad-libbed, incidental dialogue or wisecracks. This became a trademark of his performances. Late 1935 Vitaphone licensed rights to produce short comedies based on the "Joe Palooka" comic strip. Shemp was cast as "Knobby Walsh" and although he was only a supporting character, Shemp became the comic focus of the series, with Johnny Berkes and Lee Weber as his foils. Shemp costarred in the first seven shorts, released during 1936 and 1937; nine were produced all together, with the last two done after Shemp left Vitaphone to move to greener pastures on the West Coast.

Away from Vitaphone he attempted, unsuccessfully, to lead his own group of "stooges" in the Van Beuren musical comedy short The Knife of the Party. Otherwise, Shemp Howard's solo career was very successful. He followed his brothers' lead, moved to the West Coast in 1937, and picked up supporting actor roles at several studios, predominantly at Columbia Pictures and Universal Studios. He performed with such comic greats as W. C. Fields, with whom he played the bartender in the 1940 film The Bank Dick, and the comedy team Abbott and Costello, who would reportedly trim his scene-stealing material. He also lent comic relief to Charlie Chan and The Thin Man murder mysteries, and was in several Universal B-musicals of the early 1940s, among them Strictly in the Groove, How's About It?, Moonlight and Cactus, and San Antonio Rose, in which he is paired with Lon Chaney, Jr. as a faux Abbott and Costello. In most of these, his improvisational skills are highlighted. He was briefly teamed with comedians Billy Gilbert and Maxie Rosenbloom for three B-comedy features in 1944–45. He also played a few dramatic parts, such as his supporting role in Pittsburgh (1942) starring Marlene Dietrich and John Wayne. 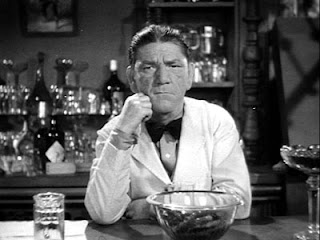 From 1939 onwards, Shemp appeared frequently in Columbia's two-reel comedies, co-starring with Columbia regulars Andy Clyde, The Glove Slingers, El Brendel, and Tom Kennedy. Howard was given his own starring series in 1944; he was working for Columbia in this capacity when his brother Curly was felled by a debilitating stroke on May 6, 1946. Shemp reluctantly replaced Curly in Columbia's popular Stooge shorts, knowing that Moe and Larry would be out of work if he refused. Initially, Shemp rejoined the Stooges on a temporary basis until Curly recovered, but as Curly's condition worsened, it became apparent that Shemp's association with the Stooges would be permanent. (Prior to replacing Curly on film, Shemp had substituted for his brother in some personal appearances in the early 1940s.)

Shemp's take as the third Stooge was much different from Curly's. While he could still roll with the punches as the recipient of Moe's slapstick abuse, he was more of a laid-back dimwit versus Curly's energetic man-child persona. And unlike Curly, who had many distinct mannerisms, Shemp's most notable characteristic as a Stooge was a high-pitched "bee-bee-bee-bee-bee-bee!" sound, a sort of soft screech done by inhaling. This was rather multi-purpose, as Shemp uttered this sound when scared, sleeping (done as a form of snoring), overtly happy, or dazed.

Shemp appeared with Moe and Larry in 73 short subjects and the feature film Gold Raiders. He suffered a mild stroke in November 1952, though he recovered from it within weeks and without noticeable effect on his remaining films with the Stooges (largely remakes of earlier films that recycled footage to reduce costs). 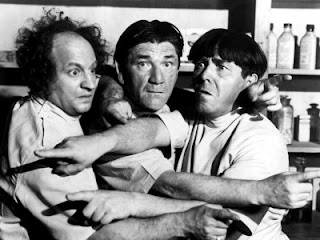 On November 22, 1955, while returning home by taxicab from attending a boxing match (one of Shemp's favorite pastimes), Shemp died of a heart attack. Shemp was lighting a cigar after telling a joke when he suddenly slumped over on his friend Al Winston's lap. Moe Howard's autobiography states that Shemp died on November 23, 1955 and most subsequent accounts point to that date because of Moe's book. But much of Moe's book was finished posthumously by his daughter and son-in-law, and some specific details were confused as a result.

The Los Angeles county coroner death certificate states that Shemp Howard died on Tuesday November 22, 1955 at 11:35 PST; confirming that, Shemp's obituary appeared in the November 23 afternoon editions of L.A. newspapers, establishing the night of November 22 as the date of death. He was entombed at Home of Peace Cemetery in East Los Angeles, the same place his brother Curly was buried. 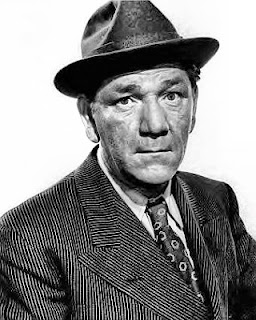 Even though Shemp was no Curly, the shorts he made with the other Stooges and every other film appearance was worth seeing. Shemp did not appear with the team in all of their short, but on even his solo work he was a stooge at heart and a stooge that should be regarded with comic admiration...
Posted by David Lobosco at 4:13 AM