Blessed with a natural talent for sharp-shooting, Annie Oakley proved herself dominant in a sport that was long considered a man's domain. Oakley was a gifted entertainer as well; her performances with Buffalo Bill Cody's Wild West Show brought international fame, making her one of the most celebrated female performers of her time. Annie Oakley's unique and adventurous life has inspired numerous books and films, as well as a popular musical.

Annie Oakley was born Phoebe Ann Moses on August 13, 1860 in rural Darke County, Ohio, the fifth daughter of Jacob and Susan Moses. The Moses family had moved to Ohio from Pennsylvania after their business -- a small inn -- had burned to the ground in 1855. The family lived in a one-room log cabin, surviving on game they caught and crops they grew. Another daughter and a son were born after Phoebe. Annie, as Phoebe was called, was a tomboy who preferred spending time outdoors with her father over household chores and playing with dolls. When Annie was only five, her father died of pneumonia after being caught in a blizzard.

Annie worked at the county poor house growing up, but she then returned to her mother's home at the age of 15. Annie could now resume her favorite pastime -- hunting. Some of the game she shot was used to feed her family, but the surplus was sold to general stores and restaurants. Many customers specifically requested Annie’s game because she shot so cleanly (through the head), which eliminated the problem of having to clean buckshot out of the meat. With money coming in regularly, Annie helped her mother pay off the mortgage on their house. For the rest of her life, Annie Oakley made her living with a gun. 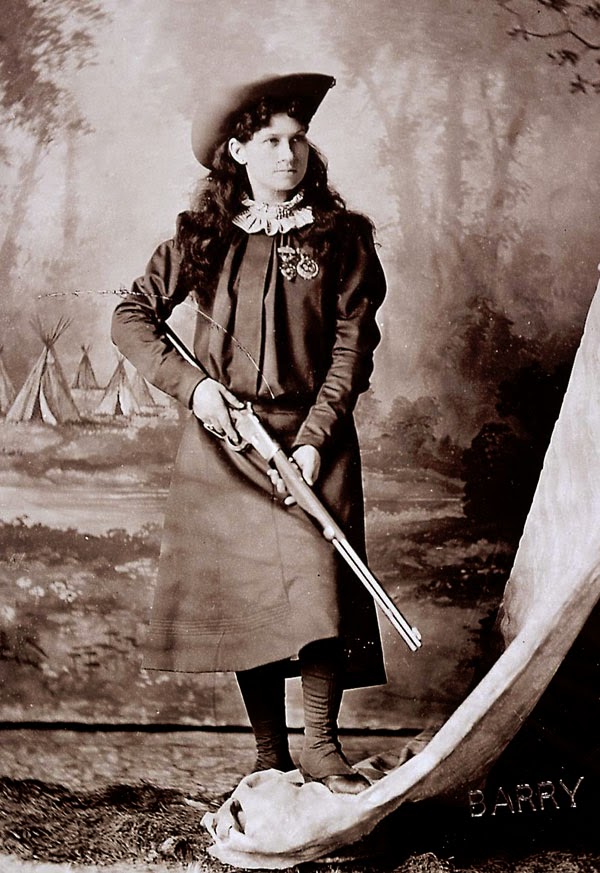 Annie entered a pigeon-shooting match in 1881 against a single opponent, unaware that soon her life would change forever. Annie's opponent in the match was Frank Butler , a sharp-shooter in the circus. He made the 80-mile trek from Cincinnati to rural Greenville, Ohio in the hopes of winning the $100 prize. Frank had been told only that he would be up against a local crack shot. Assuming that his competitor would be a farm boy, Frank was shocked to see the petite, attractive 20-year old Annie Moses. He was even more surprised that she beat him in the match.

Frank, ten years older than Annie, was captivated by the quiet young woman. He returned to his tour and the two corresponded by mail for several months. They were married sometime in 1882, but the exact date has never been verified. Once married, Annie traveled with Frank on tour. One evening, Frank's partner became ill and Annie took over for him at an indoor theater shoot. The audience loved watching the five-foot-tall woman who easily and expertly handled a heavy rifle. Annie and Frank became partners on the touring circuit, billed as "Butler and Oakley." It is not known why Annie picked the name Oakley; possibly it came from the name of a neighborhood in Cincinnati. Quickly Butler and Oakley were the toast of America and Great Britain. 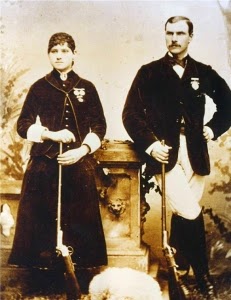 After years of living out of trunks, Frank and Annie were ready to settle down in a real home during the show's off-season (November through mid-March). They built a house in Nutley, New Jersey and moved into it in December 1893. (The couple never had children, but it is unknown whether or not this was by choice.)

During the winter months, Frank and Annie took vacations in the southern states, where they usually did a lot of hunting. In 1894, Annie was invited by inventor Thomas Edison of nearby West Orange, New Jersey, to be filmed on his new invention, the kinetoscope (a forerunner of the movie camera). The brief film shows Annie Oakley expertly shooting out glass balls mounted on a board, then hitting coins thrown up in the air by her husband. 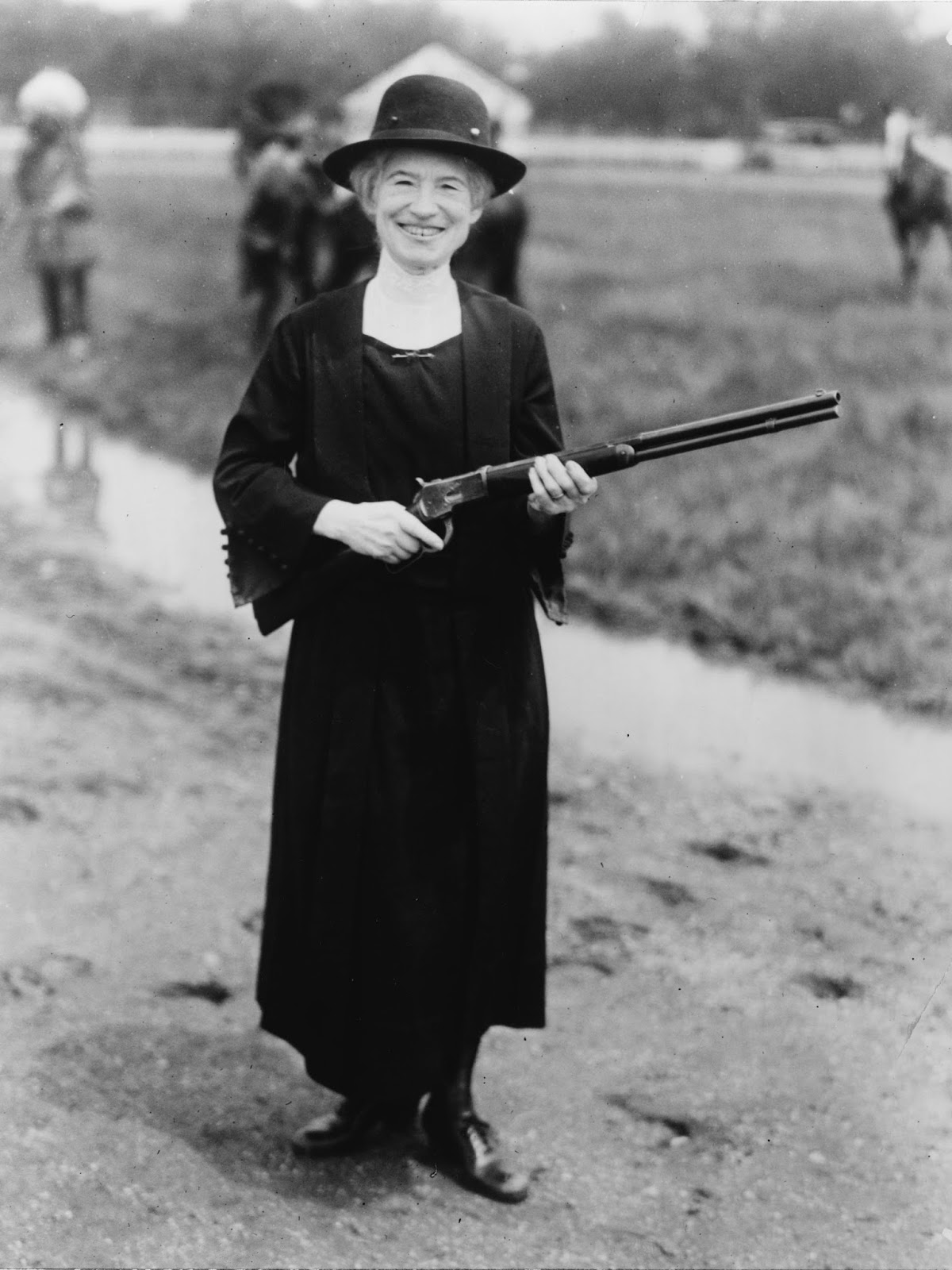 Annie and Frank kept busy, traveling together to advertise for Frank's employer, a cartridge company. Annie participated in exhibitions and shooting tournaments and received offers to join several western shows. She re-entered show business in 1911, joining the Young Buffalo Wild West Show. Even in her 50s, Annie could still draw a crowd. She finally retired from show business for good in 1913.

Annie and Frank bought a house in Maryland and spent winters in Pinehurst, North Carolina, where Annie gave free shooting lessons to local women. She also donated her time to raising funds for various charities and hospitals.

In November 1922, Annie and Frank were involved in a car accident, in which the car flipped over, landing on Annie and fracturing her hip and ankle. She never fully recovered from her injuries, which compelled her to use a cane and a leg brace. In 1924, Annie was diagnosed with pernicious anemia and became increasingly weak and frail. She died on November 3, 1926 at the age of 66. Some have suggested that Annie died from lead poisoning after years of handling lead bullets.

Frank Butler, who had also been in poor health, died 18 days later... 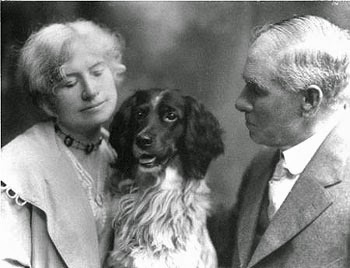