WINGY MANONE: THE ONE ARMED GENIUS 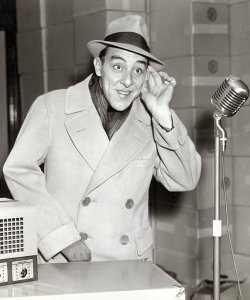 I first noticed Wingy Manone in a Bing Crosby musical, and I was amazed at his ability. I did not really know much about him or his music, but the more I heard the more I enjoyed. There is not much written on Wingy Manone, and that is a shame because he was one of the truly great jazz masters. Wingy Manone was born Joseph Matthews Mannone in New Orleans, Louisiana on February 13, 1900. He lost an arm in a streetcar accident in 1910, which resulted in his nickname of "Wingy". He used a prosthesis, so naturally and unnoticeably that his disability was not apparent to the public.

After playing trumpet and cornet professionally with various bands in his home town, he began to travel across America in the 1920s, working in Chicago, New York City, Texas, Mobile, Alabama, California, St. Louis, Missouri and other locations; he continued to travel widely throughout the United States and Canada for decades.

Wingy Manone's style was similar to that of fellow New Orleans trumpeter Louis Prima: hot jazz with trumpet leads, punctuated by good-natured spoken patter in a pleasantly gravelly voice. Manone was an esteemed musician who was frequently recruited for recording sessions. He played on some early Benny Goodman records, for example, and fronted various pickup groups under pseudonyms like "The Cellar Boys" and "Barbecue Joe and His Hot Dogs." His hit records included "Tar Paper Stomp" (an original riff composition of 1929, later used as the basis for Glenn Miller's "In the Mood"), and a hot 1934 version of a sweet ballad of the time "The Isle of Capri", which was said to have annoyed the songwriters despite the royalties it earned them.\

Manone's group, like other bands, often recorded alternate versions of songs during the same sessions; Manone's vocals would be used for the American, Canadian, and British releases, and strictly instrumental versions would be intended for the international, non-English-speaking markets. Thus there is more than one version of many Wingy Manone hits. Among his better records are "There'll Come a Time (Wait and See)" (1934, also known as "San Antonio Stomp"), "Send Me" (1936), and the novelty hit "The Broken Record" (1936). He and his band did regular recording and radio work through the 1930s, and appeared with Bing Crosby in the movie Rhythm on the River in 1940. 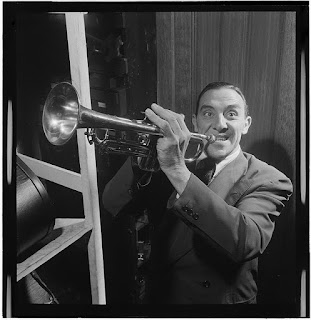 In 1943 he recorded several tunes as "Wingy Manone and His Cats"; that same year he performed in Soundies movie musicals. One of his Soundies reprised his recent hit "Rhythm on the River."

From the 1950s he was based mostly in California and Las Vegas, Nevada, although he also toured through the United States, Canada, and parts of Europe to appear at jazz festivals. In 1957, he attempted to break into the teenage rock-and-roll market with his version of Party Doll, the Buddy Knox hit. His version on Decca 30211 made No. 56 on Billboard's Pop chart and it received a UK release on Brunswick 05655.

A lifelong friend of Bing Crosby, he appears in many of Crosby's radio shows in the 1940s and 1950s. Wingy Manone lived in Las Vegas from 1954 up until his death and he stayed active until near the end, although he only recorded one full album (for Storyville in 1966) after 1960. Wingy died on July 9th 1982 in Las Vegas. Manone was largely forgotten by that time despite performing until the end. However, his talent and his ability should not be underestimated. Wingy did more musically with one arm what most people can not do with two working arms.... 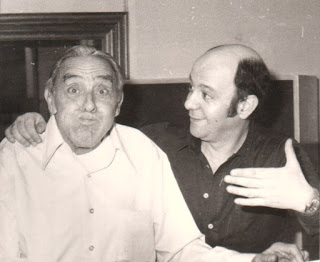 Posted by David Lobosco at 4:55 AM