FRED KELLY: DANCING IN THE SHADOWS 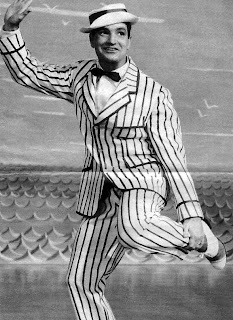 I have always been honored that I come from the same town as Gene Kelly. Kelly was and is what perfect dancing is. If I could only walk as good as Gene did - let alone dance, I would be a better person! A lot of people do not realize that Gene came from a big Irish family. Also, Gene was not the only talented one in the family. His younger brother Fred was an accomplished dancer, who spent his whole life in Gene's shadows. "Everybody knew who Gene was, but everybody knew Fred," Michael Kelly, Fred's son, once said.

Fredric N. Kelly was born in Pittsburgh on June 29, 1916, the youngest of five children: Joan, the oldest, James, Eugene, Louise and Fred. His father, James Patrick Kelly, was a sales executive with the Columbia Phonograph Company. According to Fred's reminiscences, his father, as the personal representative of Thomas Edison, sent hundreds of rail cars to the Midwest with the first phonographs and records to reach that part of the country. His mother, Harriet, performed as a hobby with a local stock company and insisted that all her children take music and dance lessons. Fred began performing at the age of 4.

The children began performing around 1921 as the Five Dancing Kellys, and they filled in in Pittsburgh for the Seven Little Foys, the popular dancing children of the vaudevillian Eddie Foy, when the Foys were trapped in Ohio by a snowstorm. Not only was Fred perceived as the family "cutie pie," but he was also the family's natural tap dancer. By the time he was 8 he was earning as much as $50 a month as a performer, good money even for an adult in 1924. It was Fred who taught Gene tap so Gene could earn extra money for college.

When a dance school where the Kelly children were enrolled failed, their mother scraped together money to pay its bills and took it over. Soon Gene and Fred were the main teachers, pushing hundreds of students through 20-minute assembly-line lessons. Shirley Temple's popularity fueled the business. In addition to performing in Pittsburgh, Fred performed every summer from the 8th through 12th grades on a showboat that played Mississippi and Ohio River ports from Pittsburgh to New Orleans. Corny comedy was a specialty.

Fred graduated from the University of Pittsburgh, where he became the first member of the family to appear in films, as the panther mascot to Pitt's football team. He then joined Gene in New York. When Gene had to give up his part in the Theater Guild's production of "The Time of Your Life" to take the title role in the Broadway stage production of "Pal Joey," he recommended that Fred replace him. With the permission of the play's author, William Saroyan, Fred increased his character's dance scenes to 11 from 6. His performance earned three Donaldson Awards, precursors of the Tony. One was presented by Helen Hayes, one by Charlie Chaplin and one by Antoinette Perry, for whom the Tony was named. 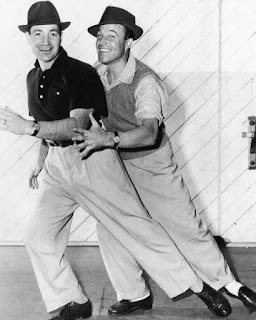 Fred Kelly got a screen test with MGM in 1941 but they were not impressed much. During World War II he performed in Irving Berlin's "This Is the Army," which began on Broadway with a cast of 300 American servicemen and toured the world. When the show played Washington, President Franklin D. Roosevelt invited the whole company to dinner at the White House. Fred ended up staying late into the evening to talk with the president and his wife, Eleanor, according to a biography prepared by Andy McGowan for the Lamb's Club, a theatrical club in which Fred was active. When the show played the Mariana Islands in the Pacific, Fred joined other entertainers standing at attention as the Enola Gay took off to drop an atomic bomb on Japan.

After the war Mr. Kelly was hired by NBC to direct television shows, including "The Steve Allen Show" and "The Colgate Comedy Hour." Fred was hired by NBC to direct the Lanny Ross Show, a pioneering musical variety program. Ross decided to stop doing the show and Fred was assigned to another, the Kay Kyser Kollege of Musical Knowledge. Later, he directed more than a thousand hours of The Steve Allen Show and the first 26 United Cerebral Palsy telethons. He directed commercials with the likes of Tallulah Bankhead, Jimmy Durante, and Olsen and Johnson for use in the shows they starred in.

Meanwhile Fred also choreographed and directed three years of Ice Capades. That show was owned by John H. Harris, owner of the Warner theaters in Pittsburgh and a big piece of Republic Pictures. When the show played Los Angeles, tickets were given to movie studios, who passed them on to their big names. Metro-Golden-Mayer tickets went to such people as Ethel and Lionel Barrymore, Clark Gable and Louis B. Mayer, but not their new actor-dancer, Gene Kelly. Fred arranged for Gene and his wife to sit in the Republic central box, next to MGM's, leading Mayer to ask why someone didn't tell him that Gene had such an influential brother.

He also taught Queen Elizabeth and her sister Margaret how to dance when they were both still young princesses. In the 1950s, his wife, Dottie, persuaded him to open a dance studio in Oradell, New Jersey, where he taught a young John Travolta to dance. He also taught at Pace University for 24 years. 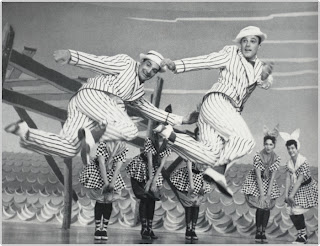 Fred performed only one onscreen dance with Gene, "I Love to Go Swimmin With Wimmen." from Deep in My Heart (1955) Fred and Gene modified a step created by the Irish-born step dancer who standardized tap dancing, Maximillian Ford. The original step is the "Maxi Ford;" the revised one is called the "Kelly Maxi Ford," both terms that are still used today. Fred continued to run his dance school as well until he sold it in 1983, and he and his wife Dottie retired to Tucson. His wife died from lung cancer in 1995, and after the death of his brother soon after, Fred never truly recoved from it.

Fred and Dottie had three children. The first, Barry, was born in 1943. A bout of brain fever at 14 months left him mentally impaired, and one of the reasons Fred worked two and three jobs at a time was to keep him in special schools until he died in 1968. Another son, Michael, was born in 1949; he, his wife Diane, and four children live in California, where Michael is a unit production manager and occasional director of Brooke Shields' Suddenly Susan television series, and stage manager of many televison show. Daughter Colleen, born in 1953, lives in Tucson with her husband Jim Beaman and four children and is a high school drama teacher, and dance instructor as well. 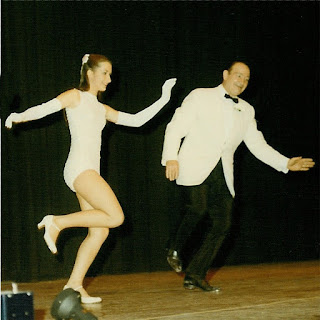 His famous brother Gene suffered a series of strokes in 1994 and 1995. Fred Kelly had said he visited his brother about three weeks before his death in a California hospital, just talking and joking.“The day I saw him, all the life supports had been removed,’ Fred Kelly said. “The last day we saw him, we shared about a half-hour of wonderful chatter.’ Gene Kelly died on February 2, 1996. Fred's older brother died a few years before that. Not much is written or known about him. His sister Harriet died in 2002 at the age of 92. Another sister Louise was the last surviving for the Kelly children. She died in 2008 at he age of 93. 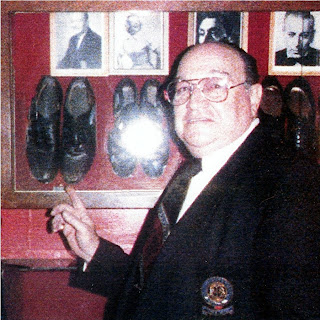