AT HOME WITH ELEANOR POWELL 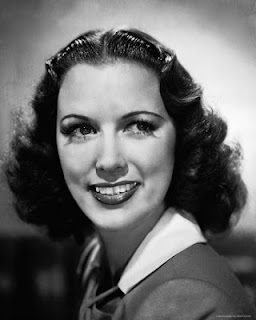 Known as "The Girl from Pennsylvania Avenue", Eleanor Torrey Powell was originally born November 21, 1912, in Springfield, Mass. Her mother, wanting Eleanor to learn to overcome her shyness, placed her in dancing school when she was but 13. She studied Ballet and "Acrobatic Dancing" and was discovered by Gus Edwards dancing in Atlantic City while still a child. Edwards put her in one of his celebrated Children's Reviews. Powell caught "the bug" and set her sites on Broadway. She took 10 lessons in Tap (for $35) and made her Broadway debut in 1928. One year later her "machine-gun footwork" earned her the title "World's Greatest Feminine Tap Dancer".

In 1935 Eleanor Powell "went Hollywood" starring in George White's Scandals. Word has it she so longed for the comfort and serenity of her Crestwood lifestyle, that when MGM approached her about doing another Hollywood film, she demanded a significant increase in wages and star billing. To her surprise, she got both (!).

Eleanor Powell stayed in Hollywood through the late 1930s, making some of the greatest musicals of the era. She became known as the Queen of Tap, and starred opposite Fred Astaire and George Murphy (both in the Broadway Melody series), among other celebrated tappers, although her forte was as a soloist. She made a total of 13 films between 1935 and 1950, giving up life on the "silvery screen" with her marriage to Glenn Ford.

Her fifth film, Broadway Melody of 1938 ( in which she starred opposite Robert Taylor,) found her in the company of another noted Crestwoodian, Robert Benchley.

Powell also had a public television show called "Faith of our Children," in the 1950's based on her Sunday School Classes. Even more than her film career she loved being with children and once said "There's nothing in the word like having a child love you." After her divorce from Ford, Powell started an short but successful night-club career. Eleanor Powell died February 11th, 1982, of cancer.

Eleanor Powell called Crestwood home in the early 1930s. Some old-timers recall with fondness this down-to-earth star of stage and screen. When she was rehearsing at home, the sound of her "tapping" on her home's hardwood floors would resonate throughout the neighborhood. An amateur ornithologist, Ms. Powell could often be found birdwatching along the Bronx River at dawn...

Posted by David Lobosco at 6:33 AM