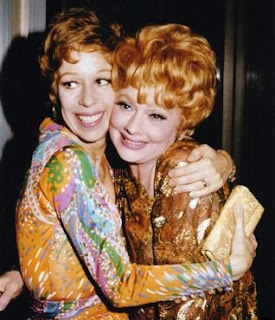 Lucille Ball was and is an icon among the pioneers of television. She starred on television in three sitcoms from 1951 to 1974, and her trail blazing sitcom "I Love Lucy" is reported played someone in the world every minute. Ball, to me, was more of an actress doing comedy than an actual comedic funny woman, but she did have great timing needed to get laughs. Ball was also good friends with a true comedic genius, Carol Burnett, and they became friends early in Carol's career.

“[Lucy] came to see me the second night of an off-Broadway show I was doing in 1958 — I was 25, and she was in the audience… I peeked out of the curtain and I saw this carrot-top in the second row and I thought I was going to die,” Carol remembered. “I was more nervous that night than I was the night before, when we opened with all the critics, because it was Lucy!

“I got through the show and then she came backstage and she called me ‘kid,’” Carol continued. “‘Kid, you were really terrific.’ She was very encouraging and she said, ‘If ever you need me for anything, kid, give me a call. I’ll be there.’”

Carol took Lucy up on her offer several years later when she was offered a special on CBS on the condition that she find a “big star” to guest star with her. After much prompting from her producer, Carol agreed to phone the “I Love Lucy” star.

“They talked me into picking up the phone and calling her and she took the call right away and said, ‘Hi kid, how are you? What’s going on?’” she told Billy and Kit. “I said, ‘Lucy, I know you’re busy, I don’t want to bother you, but they were asking me to call… I’m doing this television show special with CBS--’ and she said, ‘I’ll be there. When do you want me there?’ And that was it.” 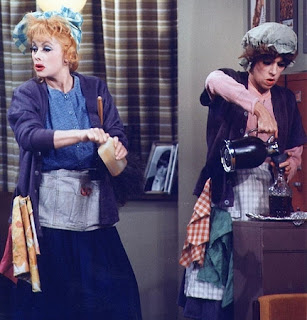 “Every year on my birthday, [Lucy] would send me flowers and she gave me my baby shower for my second baby,” Carol told Billy and Kit. “She was on my show several times and I guest [starred] on hers, so we were really close.”

Lucille Ball died on April 26, 1989 at the age of 77. Burnett added, “She died on my birthday. I remember getting up and seeing it on the morning shows and it was out of the blue. She’d been sick, but they thought she was going to come home and she died. I got my flowers [from her] that afternoon."

Recently, Carol Burnett called the executive director of the Lucille Ball-Desi Arnaz Center in Ball’s hometown to ask, “How can I help?” Executive director Ric Wyman reported, “Naturally, my first response was to invite her to Jamestown, New York. While Ms. Burnett agreed that she hopes to be able to visit here some day, she was more immediately able to provide us with something we’ve wanted for a long time.”

As a result, her hometown museum now holds in its archives a copy of every installment of The Carol Burnett Show in which Lucille Ball appeared... 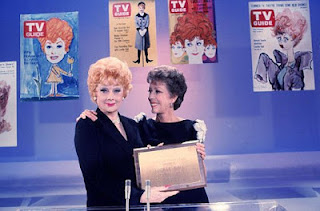 SOURCE
Posted by David Lobosco at 4:50 AM