WHAT A CHARACTER: THELMA RITTER 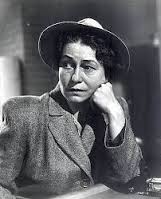 One of my favorite character actresses of all-time was the great Thelma Ritter. Surprisingly Ritter got into acting later in her life compared to other Hollywood actresses. Ritter was born in Brooklyn, NewYork City, on Februayr 14, 1902. After appearing in high school plays and stock companies, shetrained as an actress at the American Academy of Dramatic Arts. She established a stage career buttook a hiatus to raise her two children by her husband, Joseph Moran, an actor turned advertising executive.

Thelma Ritter appeared in high school plays and was trained at the American Academy of Dramatic Arts. In the 1940s she worked in radio. Her movie career was started with a bit part in the 1946 Miracle on 34th Street (1947). In the movie she played a weary Xmas shopper. Her performance in the short scene was noticed by Darryl F. Zanuck who insisted her role be expanded.

Her second role, in writer-director Joseph L. Mankiewicz's A Letter to Three Wives (1949), left a mark, although Ritter was again uncredited. Mankiewicz kept Ritter in mind, and cast her as "Birdie" in All About Eve (1950), which earned her an Oscar nomination. A second nomination followed for her work in Mitchell Leisen's' classic ensemble screwball comedy The Mating Season (1951) starring Gene Tierney and John Lund. She enjoyed steady film work for the next dozen years.
She appeared in many of the episodic drama TV series of the 1950s, such as Alfred Hitchcock Presents, General Electric Theater, and The United States Steel Hour. Other film roles were as James Stewart's nurse in Rear Window (1954) and as Doris Day's housekeeper in Pillow Talk (1959). Although best known for comedy roles, she played the occasional dramatic role, most notably in With a Song in My Heart (1952), Pickup on South Street (1953), Titanic (1953), and The Misfits (1961).

During the period 1951 to 1963 Ms. Ritter was nominated for 6 Academy Awards. She is one of the most nominated actors who never won the statue. Shortly after a 1968 performance on The Jerry Lewis Show (1967), Ms. Ritter suffered a heart attack which proved fatal. Ritter died on February 5, 1969 a few days short of her 67th birthday. She was survived by her husband of 41 years and her two children. Amazingly Thelma Ritter was only a part of Hollywood for two decades, but the countless movie roles she had will never be forgotten and a testament to what a wonderful character actress she was... 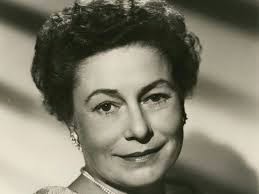 Posted by David Lobosco at 5:16 AM