HISTORY OF A SONG: TAKE ME OUT TO THE BALL GAME 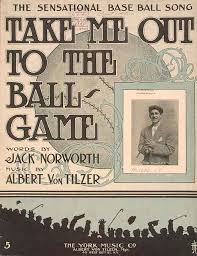 Now that my son is getting older, the theme song for "Barney" has been replaced with "Take Me Out To The Ball Game" as the most popular song in our house. Even though the game of baseball is not the same as it used to be, there is just still something great about taking your son to see a game. It is one of my favorite things I have done with my son. With the song stuck permanently in my head, I had to do some research on where this anthem of baseball came from!

"Take Me Out to the Ball Game" is a 1908 Tin Pan Alley song by Jack Norworth and Albert Von Tilzer which has become the unofficial anthem of North American baseball, although neither of its authors had attended a game prior to writing the song. The song (chorus only) is traditionally sung during the middle of the seventh inning of a baseball game. Fans are generally encouraged to sing along, and at some ballparks, the words "home team" are replaced with the team name.Jack Norworth, while riding a subway train, was inspired by a sign that said "Baseball Today – Polo Grounds". In the song, Katie's (and later Nelly's) beau calls to ask her out to see a show. She accepts the date, but only if her date will take her out to the baseball game. The words were set to music by Albert Von Tilzer. (Norworth and Von Tilzer finally saw their first Major League Baseball games 32 and 20 years later, respectively.) The song was first sung by Norworth's then-wife Nora Bayes and popularized by many other vaudeville acts. It was played at a ballpark for the first known time in 1934, at a high-school game in Los Angeles, and researchers think it made its debut at a major-league park later that year.

Norworth wrote an alternative version of the song in 1927. (Norworth and Bayes were famous for writing and performing such smash hits as "Shine On, Harvest Moon".) With the sale of so many records, sheet music, and piano rolls, the song became one of the most popular hits of 1908. The Haydn Quartet singing group, led by popular tenor Harry MacDonough, recorded a successful version on Victor Records.

The most famous recording of the song was credited to "Billy Murray and the Haydn Quartet", even though Murray did not sing on it. The confusion, nonetheless, is so pervasive that, when "Take Me Out to the Ball Game" was selected by the National Endowment for the Arts and the Recording Industry Association of America as one of the 365 top "Songs of the Century", the song was credited to Billy Murray, implying his recording of it as having received the most votes among songs from the first decade. The first recorded version was by Edward Meeker. Meeker's recording was selected by the Library of Congress as a 2010 addition to the National Recording Registry, which selects recordings annually that are "culturally, historically, or aesthetically significant". 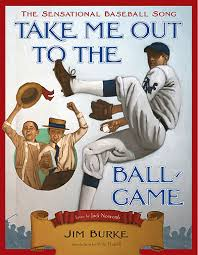 Posted by David Lobosco at 5:35 AM

Labels: baseball, song history, Take Me Out To The Ball Game