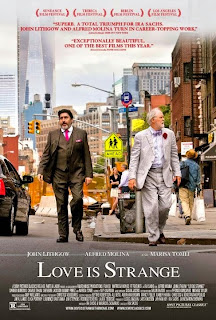 With two small children, I don't get the time to watch many new movies. However, I recently heard actor John Lithgow on NPR radio talking about his new movie in 2014, Love Is Strange, and I wanted to see it. I finally picked up a copy off of ebay and got a chance to watch it. Yes, I do not have a Netflix membership yet. I still like watching movies the old fashioned way.

Anyways,  the plot revolves around two gay men who have lived together for 39 years and finally get married, a decision that will alter their lives in ways that are unexpected and transforming. We first meet Ben, a seventy-one year old artist, (John Lithgow in a breathtaking performance) and his partner George (Alfred Molina in an equally fine portrayal,) a music teacher in a Catholic school - both excitedly, and nervously preparing for the ceremony and the post- wedding party. From the moment we first view Lithgow and Molina singing a duet together - their voices and theatrics in synch and at odds - tender intimacy is apparent. Ira Sachs and co-writer Mauricio Zacharias have created two remarkably gentle and loving individuals, their intimacy and enduring connection, is both understated and powerfully passionate.

The consequences of ultimately legitimizing their union bear witness to the harsh realities that accompany that choice. Soon after the nuptials, George gets fired from his job, and the economic demands of existing in NYC, forced to sell the apartment in order to find more affordable housing, interrupts their former cadence of living. Having no alternative, George and Ben, temporarily separate to move in with friends and relatives till they can find a home of their own. Molina and Lithgow stunningly convey the anguish of living apart and the intense longing of being united again. It is as if one person is sliced in half – going through the motions, but not fully functioning without the other. 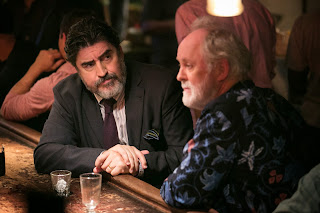 The movie, and the modern romance between John Lithgow and Alfred Molina had the potential to make this film a modern classic, but the last fifteen minutes of the movie seem like it was pieced together all wrong. Maybe the studio got hold of the film and edited it, but I feel the ending, as it stands, did not give the movie the finale it deserved. Love Is Strange was like watching a runner in a marathon that starts off strong, but loses energy in the end. The best part of the movie was Lithgow and Molina, who make you believe quite easily and quickly that they are a couple. However, I wish the movie told the ending a little better. It was well worth finding this copy off of Ebay, and it was well worth watching this beautiful film featuring some wonderful acting though... 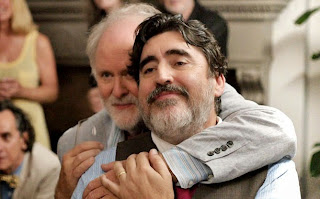