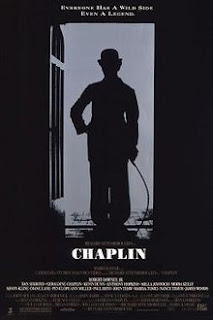 I have to admit, I am a big fan of movie biographies. I even like so called film bios of the 1940s like Jolson Story (1946) - the life of Al Jolson and Words And Music (1948) - the life or Lorenz Hart and Richard Rodgers. However, I was excited to see my all-time favorite film bio again! The movie Chaplin (1992) I believe is by far the best so-called biography ever to be put on film. The movie is not perfect, but I think Robert Downey Jr was one of the few people able to capture the magic that was and is Charlie Chaplin.

The film was adapted by William Boyd, Bryan Forbes and William Goldman from the books "My Autobiography" by Chaplin and "Chaplin: His Life and Art" by film critic David Robinson. Associate producer Diana Hawkins got a story credit. The original music score was composed by John Barry. It was produced and directed bythe great Richard Attenborough.

The film is structured around lengthy flashbacks as the elderly Charlie Chaplin (Robert Downey Jr.) (now living in Switzerland) recollects moments from his life during a conversation with fictional character George Hayden (Anthony Hopkins), the editor of his autobiography. Chaplin's recollections begin with his childhood of extreme poverty, from which he escapes by immersing himself in the world of the London music halls, after which he relocates to the United States.

There are references to some of his many romantic episodes (including Hetty Kelly, Mildred Harris, Georgia Hale, Marion Davies, Edna Purviance, Lita Grey, Paulette Goddard, Joan Barry and Oona O'Neill), his professional collaboration with Mack Sennett and friendship with Douglas Fairbanks.

Downey was not the only great actor in the movie. Geraldine Chaplin, Charlie's daughter, played her own grandmother in the film, and she captured Charlie's mother's decent into insanity very convincingly. Kevin Kline was in great form as Charlie's swashbuckling friend Douglas Fairbanks Sr. Also rounding out the cast was the underrated Nancy Travis as Joan Berry - a troubled woman who accused Chaplin of having a child with her out of wedlock. The child was proven not to be Chaplin's but he was forced to support the child until the baby turned 21. 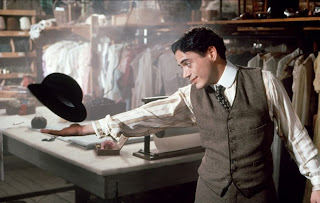 Although the film was criticized for taking dramatic licence with some aspects of Chaplin's life, Downey's performance as Chaplin won almost universal acclaim. Attenborough was sufficiently confident in Downey's performance to include historical footage of Chaplin himself at the end of the film. The film was lauded for its high production values, but many critics dismissed it as an overly glossy biopic. One critic wrote that the screenplay "endeavors to cover too much ground. The life of Charlie Chaplin was so vast and varied that a film is far too restrictive a format to give it justice.

My major complaint with the film was the make up for Robert Downey Jr that was used to age him to an 80 year old man at the end of the film. At the time of the film Downey was only 27, so to age him over fifty years was a daunting task. However, they made Downey look more like a burn victim than an elderly man. Maybe it is just me, but it does not look realistic. However, that barely takes away from the quality of the film and the portrayal of the subject. My wife is not a silent movie fan. I showed her this movie, and she wanted to watch a Charlie Chaplin movie after seeing it. Everytime I catch this movie on television, I am inspired by the film, by the superb acting of Robert Downey Jr, and by Chaplin himself - who I believe was one of the film industry's greatest geniuses... 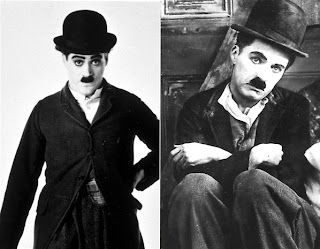