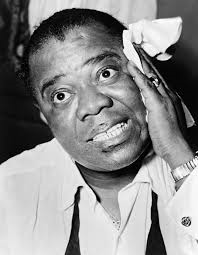 On this night in 1957, Louis Armstrong, in his hotel room in Grand Forks, North Dakota, blew his top over the Little Rock Central High School integration crisis, blasting Governor Orval Faubus for being "two-faced" and President Dwight Eisenhower for having "no guts" to let Faubus call in the National Guard in to prevent black students from integrating the high school. "The way they are treating m...y people in the South, the government can go to hell," he barked. "It's getting so bad a colored man hasn't got any country."


Armstrong put his entire career on the line to speak out against injustice as his September 17 North Dakota comments made headlines around the world. However, a recently discovered private reel-to-reel tape owned by Armstrong found the trumpeter venting about Faubus and the Little Rock situation to interviewers on September 8 and September 10. He had spent over a week telling anyone who would listen about the injustice going on in Little Rock but it wasn't until reporter Larry Lubenow of North Dakota ran with Armstrong's September 17 comments that the story blew up.

Armstrong received little support at the time, instead getting more criticism from both the white and black press. Today, his stance is celebrated as a landmark moment in Civil Rights. He knew what he had done. He cut out various clipping about the incident, wrapped them in Scotch tape and stuck them in a scrapbook. This is Armstrong's copy of a Pittsburgh Courier story about his Little Rock comments, containing some of his fiercest comments... 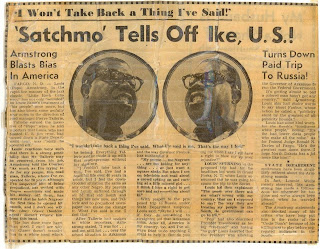