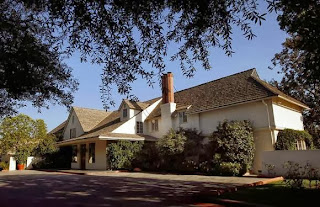 Richard Nixon's helicopter once landed on the back lawn so the president could play a round at the nearby Lakeside Golf Club. Lucille Ball and Jack Benny drank and gossiped at the holiday parties in the living room. And the homeowner, Bob Hope, tried out punch lines on his kids in the dining room. For the first time since the long-lived entertainer built his home in a San Fernando Valley walnut grove in 1939, Hope's 5.16-acre Toluca Lake estate goes on the market Monday, at an asking price of $27.5 million, according to the Los Angeles Times. The compound that Hope shared with his wife, Dolores, and their four children has a nearly 15,000-square-foot house, a golf hole, an indoor pool and a manicured rose garden.

The flat, sprawling lot is unusual for the upscale neighborhood and others like it; in Toluca Lake and similar ZIP Codes in Sherman Oaks, Encino, Studio City, Bel-Air, Holmby Hills and Beverly Hills, there are only 22 properties of more than five acres that belong to a single owner, according to a property search conducted by the estate. The comedian and movie star collected real estate and at one point was one of California's largest individual property owners, holding some 10,000 acres in the San Fernando Valley alone. But it was the house at 10346 Moorpark St. that he considered home, according to his daughter, Linda Hope, who still lives a few blocks away.

"The Moorpark house is a very special property in the Valley and something that meant a whole lot to my mother and dad," she said. "They built what for them was kind of a dream house." The sale will mark a major change in the neighborhood that the Hopes helped to shape. The home, which is listed with Jade Mills of Coldwell Banker and Drew Fenton of Hilton & Hyland, has grown and evolved over the years. Architect Robert Finkelhor designed the original English traditional-style main house, and in the 1950s, John Elgin Woolf renovated it in a more contemporary style, using glass to accommodate Dolores' desire to bring the expansive feeling of the grounds inside.

The Hopes left many belongings for their heirs to sort and distribute, a process that has taken years: multiple auctions of items such as Bob's golf cart and Dolores' Chinese porcelain, a sale at St. Charles Borromeo Church and a garage sale at the home that had lines stretching down Moorpark. Another Hope home, in Palm Springs, a modernist estate that architect John Lautner designed to resemble a volcano, went on the market in February with an asking price of $50 million and has yet to find a buyer. "Putting the Moorpark house on the market, in a way it's a light at the end of the tunnel," Linda Hope said. "It's been an occupation for two years at least. Every time we'd open a closet, we'd go, 'Ahh!' " One amusing find, particularly given the Hopes' vast wealth, was bags of quarters — Dolores' winnings from years of playing gin rummy with actor Telly Savalas. The six-bedroom, seven-bathroom main house has been staged for sale with contemporary furnishings, but elements of the Hopes' lifestyle dot the property, including the giant "H" in the iron entry gates.

When Bob Hope traveled, often on one of his 57 tours to entertain the U.S. military, Dolores liked to add a room or two. "When Dad came back, Mother would joke that he'd need a road map to find the bedroom," Linda Hope said. The estate was designed around the particular needs of the Hopes, including privacy, with large trees bordering the grounds, and a 4,000-square-foot front office building for the staff that managed the Hopes' very successful businesses in radio, television, film and real estate. Bob Hope died in 2003 and his wife Dolores died in 2012...

Posted by David Lobosco at 5:36 AM