MY FIVE FAVORITE FILMS OF THE 1970S 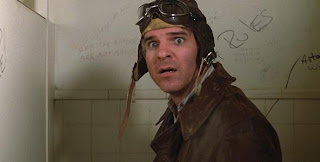 5. THE JERK (1979)
This uproarious comedy made Steve Martin a star. Directed by Carl Reiner, the film was written by Steve Martin, Carl Gottlieb and Michael Elias. This was Steve Martin's first starring role in a feature film. The film also features Bernadette Peters, M. Emmet Walsh and Jackie Mason. In the film Martin plays Navin Johnson. He was abandoned as a child and raised by a sympathetic black family. Now grown Navin does not realize that he is white and not black. He longs to find his way in the world so he sets off to find his “special purpose”. Look for Carl Reiner in a small role playing “Carl Reiner the actor” The movie is simple and Martin’s character is idiotic, but I find myself laughing my way through the movie each time I see it.


4. STAR WARS (1977)
The first film in the series was originally released on May 25, 1977, under the title Star Wars, by 20th Century Fox, and became a worldwide pop culture phenomenon, followed by two sequels, released at three-year intervals. In my opinion, the second movie of the franchise, The Empire Strikes Back, was the best movie in the serious. However, this first movie set the stage for one of the most popular movie series in cinema history. The events depicted in Star Wars media take place in a fictional galaxy. Many species of alien creatures (often humanoid) are depicted. Robotic droids are also commonplace and are generally built to serve their owners. Space travel is common, and many planets in the galaxy are members of a Galactic Republic, later reorganized as the Galactic Empire. I am not a science fiction fan, but this series was one of the biggest things during my childhood. I long for those days. 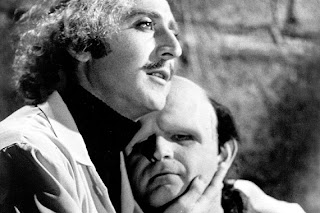 3. YOUNG FRANKENSTEIN (1974)
The comedy scene in the 1970s belonged to Mel Brooks. Hollywood never truly saw the type of movies Brooks directed until he came along. The film stars Gene Wilder as the descendent of Dr. Frankenstein who uncovers his family scientific secrets. Peter Boyle is very underrated as the Monster. The cast is made in cinema heaven and included: Marty Feldman (perfect as Igor), Terri Garr, Madeline Kahn, Cloris Leachman, and Gene Hackman (in a scene stealing cameo). The film is an affectionate parody of the classical horror film genre, in particular the various film adaptations of Mary Shelley's novel Frankenstein produced by Universal in the 1930s. Most of the lab equipment used as props were created by Kenneth Strickfaden for the 1931 film Frankenstein. To further reflect the atmosphere of the earlier films, Brooks shot the picture entirely in black-and-white, a rarity in the 1970s, and employed 1930s-style opening credits and scene transitions such as iris outs, wipes, and fades to black. The film also features a notable period score by Brooks' longtime composer John Morris. Young Frankenstein is easily one of my favorite comedies of all time.


2. THE GODFATHER PART II (1974)
This film sequel is one of those rare sequels, where the second movie surpasses the original film in popularity and quality. The movie is a 1974 American crime epic that Francis Ford Coppola produced, directed, and co-wrote with Mario Puzo, starring Al Pacino, Robert Duvall, Diane Keaton, and Robert De Niro. Partially based on Puzo's 1969 novel, The Godfather, the film is in part both a sequel and a prequel to The Godfather, presenting two parallel dramas. The main storyline, following the events of the first film, centers on Michael Corleone (Pacino), the new Don of the Corleone crime family, trying to hold his business ventures together from 1958 to 1959; the other is a series of flashbacks following his father, Vito Corleone (De Niro), from his childhood in Sicily in 1901 to his founding of the Corleone family in New York City. Nominated for 11 Academy Awards and the first sequel to win for Best Picture, its six Oscars included Best Director for Coppola, Best Supporting Actor for De Niro and Best Adapted Screenplay for Coppola and Puzo. Pacino won the BAFTA Award for Best Actor and received a nomination for the Academy Award for Best Actor. It deserved every award it received. 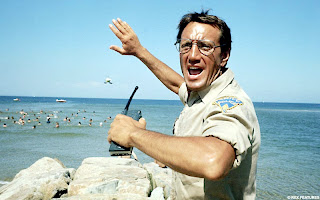 1. JAWS (1975)
I personally have to name Jaws as my favorite movie of the 1970s. It is also my favorite movie of all-time. Many people are surprised that this would be an all time favorite movie, but I have converted a few non believers to appreciate and realize what a great movie this is. Jaws is a 1975 American horror/thriller film directed by Steven Spielberg and based on Peter Benchley's novel of the same name. The prototypical summer blockbuster, its release is regarded as a watershed moment in motion picture history. In the story, a giant man-eating great white shark attacks beachgoers on Amity Island, a fictional summer resort town, prompting the local police chief to hunt it with the help of a marine biologist and a professional shark hunter. The film stars Roy Scheider as police chief Martin Brody, Richard Dreyfuss as oceanographer Matt Hooper, Robert Shaw as shark hunter Quint, Murray Hamilton as the mayor of Amity Island, and Lorraine Gary as Brody's wife, Ellen. The screenplay is credited to both Benchley, who wrote the first drafts, and actor-writer Carl Gottlieb, who rewrote the script during principal photography. I could write a book just on this movie, even though I have seen the film at least 70 times, I still find tidbits that I miss…