RECENTLY VIEWED: I SAW WHAT YOU DID 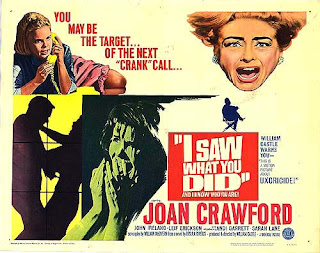 There comes a time in the career of every actor and actress, when they need to sit back and pick roles that are age appropriate. It seems like that in the 1960s, Joan Crawford was still thinking she was the love goddess of MGM from the 1930s. I recently caught a TCM showing of I Saw What You Did, and I was amazed that in her 50s, Crawford was trying to play the object of desire.

I Saw What You Did (1965) is a Universal Pictures feature film starring Joan Crawford and John Ireland in a tale of murder. The screenplay by William P. McGivern was based upon the 1964 novel Out of the Dark by Ursula Curtiss. The film was produced and directed by William Castle. 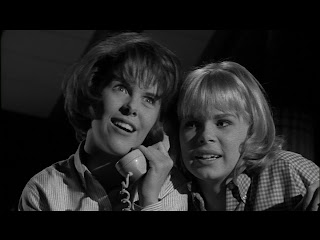 When two mischievous teens Libby (Andi Garrett) and Kit (Sara Lane) are home alone with Libby's younger sister Tess (Sharyl Locke), they begin randomly dialing telephone numbers from the phonebook with prank messages, later telling whomever answers: "I saw what you did, and I know who you are." Libby places a call to Steve Marak (Ireland), a man who has recently murdered his wife (Joyce Meadows) and disposed of her body in the woods. Believing he has been found out, he decides to track down the caller and silence her.

Neighbor Amy Nelson (Joan Crawford) is in love with Marak and has been trying to woo him away from his wife. She finds out about the murder. Libby wants to get a look at Marak because she was intrigued by his voice and takes Tess and Kit in her parent's car to Marak's address. Libby is discovered by Amy and chased off. Thinking she's preventing Marak from meeting with a younger lover, Amy inadvertently saves Libby from being captured and killed, but Marak stabs her to death when she tries to blackmail him into marrying her. Amy had taken Libby's ID and Marak uses it to track down the girls. 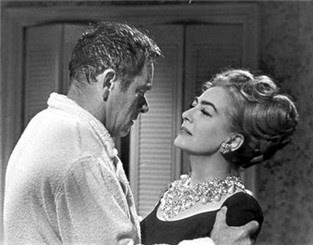 During this time the parents have been unable to contact the girls by phone. A policeman arrives to investigate just after the girls arrive at Libby's home. Libby swears Kit to secrecy over their misadventure. Kit's father arrives to take her home. While he drives her home, the car radio announces that a woman's body was found in the woods with a description of the man seen leaving the burial site.

Marak enters the home and questions Libby and Tess about the call. Libby convinces him it was just a prank. He returns her ID and leaves but waits outside. Kit calls Libby and Libby describes Marak. Kit tells her that he matches the description of the killer. Marak overhears this and returns to silence Libby and Tess but they evade him. Kit tells her father and he calls the police. Libby tries to escape but cannot start her parent's car. Marak emerges from the back seat and starts to strangle Libby, but he is shot by a police officer. Libby and Tess return to their home to await their parents' arrival.

This low budget horror flick was pretty much panned by critics, but audiences seemed to enjoy the cheesy value of the film. The film scenes especially the murder of the wife, seems choppy at best. Crawford overacted in the film like she was starring in an Oscar worthy romp. My wife always says I love every classic movie, but this movie will prove her wrong. I thought the film was horrible, but it did fill my Saturday night when nothing else was on... 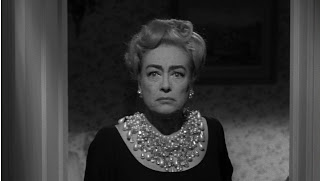 Posted by David Lobosco at 4:38 AM

Labels: horror, I Saw What You Did, Joan Crawford, movie review, recently viewed