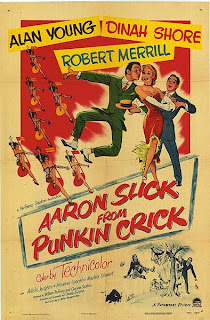 Dinah Shore was one of television greatest personalities in the 1950s and 1960s. However, throughout her career Dinah wanted to be an actress as well. She made some cameo appearances and supporting roles in musicals but never really made it as an actress. She tried desperately to get a role in MGM's Show Boat but they passed on her in favor of more opular MGM stars like Kathryn Grayson and Ava Gardner. However, Dinah was not discouraged and instead went to Paramount Pictures to make a strange forgotten musical called Aaron Slick from Punkin Crick (aka Marshmallow Moon in the UK). The film was made in 1952 and starred Shore and Alan Young (a decade before Mr. Ed fame). It was directed by Claude Binyon and produced by William Perlberg and George Seaton.

The film was based on a 1919 play by Walter Benjamin Hare. The cinematography was by Charles Lang and the costume design by Edith Head. The movie is sort of a poor man's Lil Abner. The whole thing revolves around the title character, Aaron Slick, a farmer in mid-west America and his neighbor and would-be fiancé, Josie Berry. Aaron loves the farm but Josie dreams of the big city. She wants to sell her farm and travel while Aaron wants her to marry him and settle down but he is too shy to ask her. When a show visits the town Josie agrees to let two of the performers, William Merridew and his partner Gladys, stay at her house. 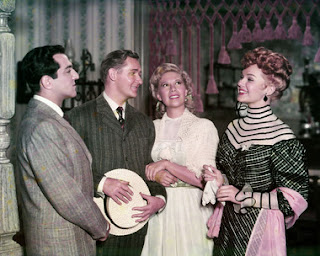 Merridew pretends that Gladys is his cousin while she is, in reality, his accomplice in crime. The two are confidence artists who are on the run after pulling a land sale scheme in Chicago and are looking for a place to hide out. While walking in the pasture on Josie's farm Merridew steps in some mud near a spring and discovers oil on his foot. Convinced that there is oil on the property he schemes to cheat Josie and offers to buy her land. Aaron, who has an idea what is going on, makes a counter-offer. Merridew thinks that Aaron is after the oil as well so he offers Josie $20,000. Josie sells her farm and goes to Chicago to "live it up". After a short time she finds that the "good life" is not what she really wants. She is homesick for the farm and she misses Aaron. Eventually she goes back to the farm. Eleven songs were written for the film by Jay Livingston and Ray Evans, but all of them were pretty much forgettable.

Opera star Robert Merrill rounds out the cast, and actually broke his contract with the Metropolitan Opera in order to make this film. Dinah Shore and Alan Young are a very likeable couple but this precursor to Green Acres does not work. I blame the screenplay as well as the songs. Dinah Shore deserved better in this movie. The movie pretty much flopped and as a result Shore was never cast again in movie in any major role. Luckily, Dinah Shore had more success in records and televisions, because that songbird definitely had talent... 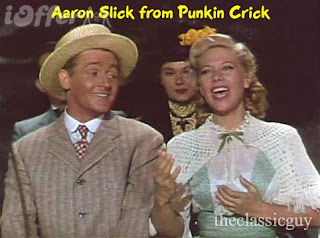 Posted by David Lobosco at 5:02 AM