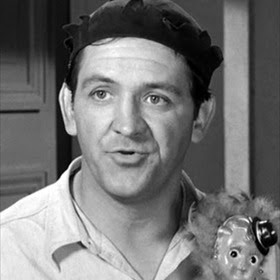 George Lindsey, best remembered for his role of Goober Pyle – cousin of Gomer Pyle – on CBS's rural sitcom The Andy Griffith Show, died Sunday morning in Nashville, where he lived, after a lengthy hospitalization, reports The Tennessean. He was 83.

Andy Griffith, 85, said in a statement that accompanied the Lindsay family's announcement of the death, "George Lindsey was my friend. I had great respect for his talent and his human spirit."

Griffith also said the two often spoke by phone. "Our last conversation was a few days ago. We would talk about our health, how much we missed our friends who passed before us and usually about something funny. I am happy to say that as we found ourselves in our 80s, we were not afraid to say, 'I love you.' That was the last thing George and I had to say to each other. 'I love you.' "

An Alabama native who was raised by his grandparents, Lindsey got the acting bug at 14 when he saw a performance of the musical Oklahoma!. He was a school athlete who also displayed a sharp sense of humor, and he went to college to become a teacher, according to the Tennessean.

While in the Air Force stationed in Orlando, Fla., he met and, in 1955, married Joyanne Herbert, and they had two children. The marriage lasted until 1991.

Before his long TV career, which also included another comic stint on CBS's Hee Haw, Lindsey studied acting in New York and played in stage productions there.