BORN ON THIS DAY: BEATRICE LILLIE 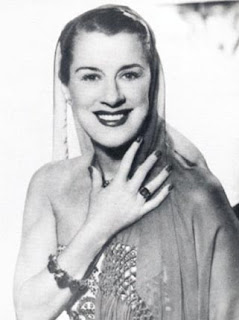 Lillie was born in Toronto, where she performed, along with other Ontario towns as part of a family trio with her mother and older sister, Muriel. Eventually, her mother, Lucie, took the girls to London, England where she made her West End debut in the 1914 Not Likely. She was noted primarily for her stage work in revues, especially those staged by André Charlot, and light comedies, and was frequently paired with Gertrude Lawrence, Bert Lahr and Jack Haley.

In her revues, she utilized sketches, songs, and parody that won her lavish praise from the New York Times after her 1924 New York debut. In some of her best known bits, she would solemnly parody the flowery performing style of earlier decades, mining such songs as "There are Fairies at the Bottom of our Garden" and "Mother Told Me So" for every double entendre, while other numbers ("Get Yourself a Geisha" and "Snoops the Lawyer", for example) showcased her exquisite sense of the absurd. Her performing in such comedy routines as "One Double Dozen Double Damask Dinner Napkins", (in which an increasingly flummoxed matron attempts to purchase said napkins) earned her the frequently used sobriquet of "Funniest Woman in the World". She never performed the "Dinner Napkins" routine in Britain, because British audiences had already seen it performed by the Australian-born English revue performer Cicely Courtneidge, for whom it was written. 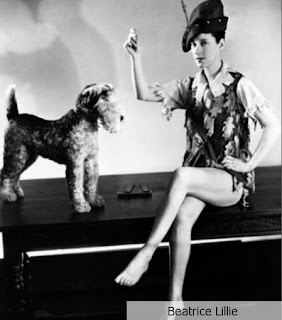 In 1926 she returned to New York city to perform. While there, she starred in her first film, Exit Smiling, opposite fellow Canadian Jack Pickford, the scandal-scarred younger brother of Mary Pickford. From then until the approach of World War II, Lillie repeatedly crisscrossed the Atlantic to perform on both continents. She was long associated with the works of Noël Coward (giving, for instance, the first ever public performance of "Mad Dogs and Englishmen"), though Cole Porter is among those who also wrote songs for her. She made few appearances on film, appearing in a cameo role as a revivalist in Around the World in Eighty Days and as "Mrs. Meers" (a white slaver) in Thoroughly Modern Millie.

She was married, on January 20, 1920, at the church of St. Paul, Drayton Bassett, Fazeley, Staffordshire, to Sir Robert Peel, 5th Baronet. She eventually separated from her husband (but the couple never divorced); he died in 1934. Their only child, Sir Robert Peel, 6th Baronet, was killed in action aboard HMS Tenedos in Colombo Harbour, Ceylon (present-day Sri Lanka) in 1942. During World War II, Lillie was an inveterate entertainer of the troops. Before she went on stage one day, she learned her son was killed in action. She refused to postpone the performance saying "I'll cry tomorrow."

She retired from the stage due to Alzheimer's disease and died on January 20, 1989. She was a funny lady who never let her personal problem or harships get in the way of a performance. She was a definite example of someone who believe that the show should always go on... 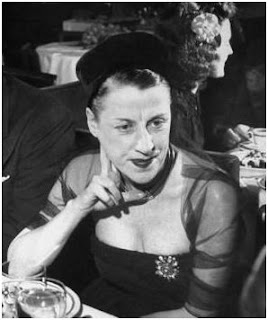 Posted by David Lobosco at 4:28 AM