Her Kansas home in "The Wizard of Oz" flew through the air. Now a Bel-Air house that was home to a young Judy Garland has flipped, selling for the second time since last year for $6,772,669.

The Wallace Neff-designed house sold in 2011 for $5.2 million and was then updated and renovated. 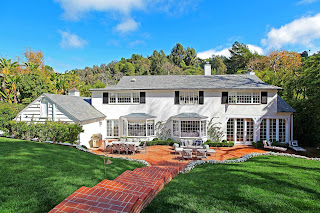 The two-story traditional, built in 1938, sits on about 2.5 acres. The 5,513-square-foot house features dormer and bay windows, white columns, French doors, five bedrooms and 6 ½ bathrooms. Outdoor amenities include a swimming pool and a detached studio.

SOURCE
Posted by David Lobosco at 5:23 AM