URBAN LEGEND: Were Lou Costello's last words, "That was the best ice cream I ever had"? 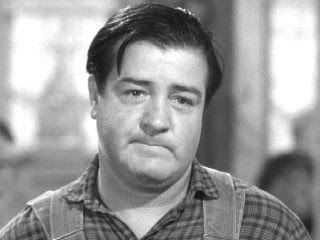 Shortly after completion of The 30 Foot Bride of Candy Rock — his only starring film appearance without  Bud Abbott — Lou Costello suffered a heart attack. He died at Doctors Hospital in Beverly Hills on March 3, 1959, three days before his 53rd birthday. Sources conflict on the circumstances of his last day and final words. By some accounts, restated in numerous "quotes" aggregates, he told visitors that the strawberry ice-cream soda he had just finished was "the best I ever tasted", then expired. By other reports, including several contemporaneous obituaries, the ice-cream soda exchange occurred earlier in the day; later, after his wife and friends had left, he asked his private-duty nurse to adjust his position in bed. "I think I'll be more comfortable", he said; but before the nurse could comply, he suffered a cardiac arrest and died... 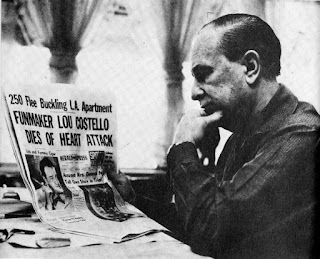 Posted by David Lobosco at 1:06 PM