Even though 1954's White Christmas is the most remembered of the holiday musicals, I think Irving Berlin's Holiday Inn (1942) is the best movie. Here are some fun facts about this 1942 classic... 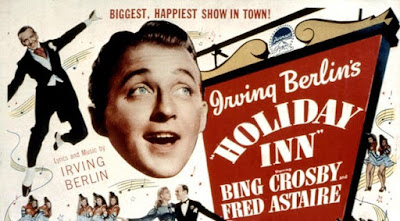 1. The firecracker dance sequence required 3 days of rehearsal and took two days to film. Fred Astaire's shoes for the dance were auctioned off for $116,000 worth of war bonds.

2. The first public performance of the song "White Christmas" was by Bing Crosby on his NBC radio show "The Kraft Music Hall" on Christmas Day, 1941, during the middle of filming _Holiday Inn (1942)_, which was released seven months later. The song went on to become one of the biggest selling songs in the history of music. This was the first of three films to feature Crosby singing "White Christmas".

3. Irving Berlin got the idea for the film after writing the song "Easter Parade" for his 1933 show "As Thousands Cheer", and planned to write a play about American holidays, but it never materialized. He later pitched the idea to Mark Sandrich who got the ball rolling for this film. 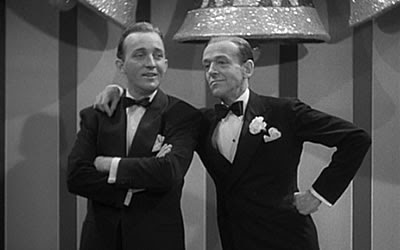 4. Some controversy surrounded the history of the song "White Christmas" when it was reported in a 1960 news item that Irving Berlin wrote the song in 1938, which would have made it ineligible for an Academy Award nomination. But a biography and modern sources agree it was written for this film, and the sheet music has a 1942 copyright date.

5. The set of the Holiday Inn was reused by Paramount 12 years later for the musical White Christmas, also starring Bing Crosby and again with songs composed by Irving Berlin.

6. The script originally called for a Labor Day dance number, "This Is a Great Country." The holiday and song was cut from the film.

7. Until 1997, "White Christmas" was the best selling music single ever. It was passed at that time by "Goodbye, England's Rose", the Elton John rework of "Candle in the Wind" done for Princess Diana's funeral. These two songs still rank #1-2... 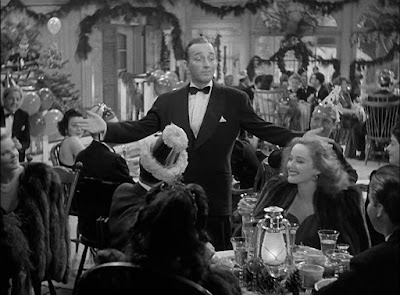 Posted by David Lobosco at 7:26 AM