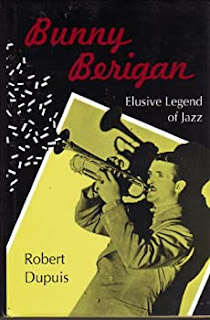 Bunny Berigan was considered the best white trumpeter of swing era jazz, who died prematurely in 1942 at just 33 years-of-age. The factors leading to his demise were alcoholism and overwork (the endless grind of one-nighters), plus the added stress of a poor business sense that led to bankruptcy, as well as energy sapping extra-marital dalliances (most notoriously with singer Lee Wiley). This well-balanced, well-researched, and well-written bio covers his professional and personal lives fully, thanks to the cooperation of many of Bunny's relatives, friends, and musical colleagues.
As a trumpeter, Berigan was a powerful technician and expressive soloist, always finishing in the top three in the polls of jazz fans during his heyday alongside Louis Armstrong and Harry James. Dupuis chronicles his rise and fall in objective detail with much care and feeling for his subject. Bunny Berigan was a tragic figure who inspires adulation among his fans decades after his death. I knew the background of Bunny Berigan's life as was familiar with his mega hit "I Can't Get Started". I knew he died tragically, but I was at best casually acquainted with Berigan's life before digging into this book. Nonetheless, I found Robert Dupuis's excellent biography a joy to read. Thoroughly researched and honest, the author manifests his love for Berigan's music without compromising his objectivity as a biographer.

When Dupuis was doing his research in the 80s, he still had access to many who knew and loved Berigan first-hand - Berigan's widow Donna, a sister-in-law, two daughters, locals who knew Berigan from his Fox Lake days, and a number of musicians who had worked with Berigan. He also drew on the extensive work of several other Berigan researchers, notably Bozy White and Tom Cullen. Dupuis presents a nuanced portrait of Berigan that praises his fabulous musicianship and bluntly describes the alcoholism that took his life, but also delves at length into his strengths and weaknesses as a family man, band-leader, and friend. In learning of Berigan's life, we also learn much about the lot of swing-era instrumentalists, their lives marked by frequent and often brutal travel, long hours on the bandstand and in the studio, and exploitative industry practices that apparently reached deep into the pockets of even a top-echelon talent like Berigan.

Bunny Berigan's life was a tragedy, but with excellent books like these, Berigan's life is retold. His music and genius will never be forgotten. I highly recommend this book...
MY RATING: 10 OUT OF 10 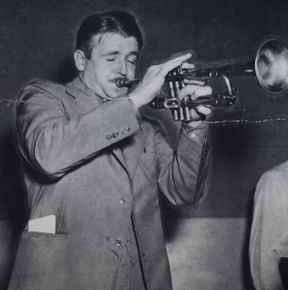 Posted by David Lobosco at 8:41 AM