GUEST REVIEW: SOMEBODY LOVES ME 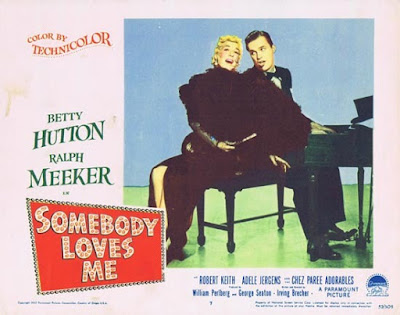 Our guest reviewer Bruce Kogan returns to take a look at the forgotten 1952 musical Somebody Love Me. I haven't seen this music in years!

For Betty Hutton's last film with Paramount and her next to last appearance on the big screen altogether she plays the fourth and last of four real people she was cast in her career as. Betty plays Blossom Seeley vaudeville and musical comedy star who was still performing when this film was made. Betty's other real life characters on screen were Annie Oakley, Pearl White, and Texas Guinan. However unlike Seeley, the other three women were deceased when films about them were made.

Not only was Seeley still around, but so was her husband Benny Fields who was in ill health pretty much at that time. And one guy who is not mentioned at all in the film is Hall of Fame baseball pitcher Rube Marquard. He was Blossom Seeley's second husband, she had two of them before she met Fields. That part of the story is not told, but her first husband was a gentleman named George Kane whom she left for Marquard. The notoriety of baseball and show business was equivalent to Joe DiMaggio and Marilyn Monroe in that time and Alex Rodriguez and Madonna in the present day. Marquard used to appear with her in vaudeville and he outlived both Blossom and Benny living to the ripe old age of 93 and dying in 1980. 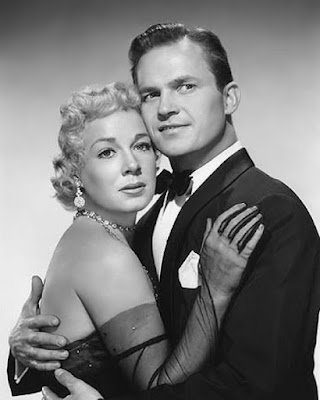 But that was all in the past when most of this film's action takes place. Blossom is a big star who decides to expand the act by hiring a trio to perform with her that includes, Ralph Meeker, Sid Tomack, and Henry Slate. But Meeker wants to make it a duo.

Meeker's part as Benny Fields is poorly written and should have been played by a singer. It would have been great had Betty Hutton got Frank Sinatra as she wanted. Meeker's part is written as a heel, but Fields and Seeley were an established team still known in 1952. Sounds like the writers and director couldn't figure out how Meeker should come across. The unknown singer they got for Meeker sounded reasonably like Benny Fields. 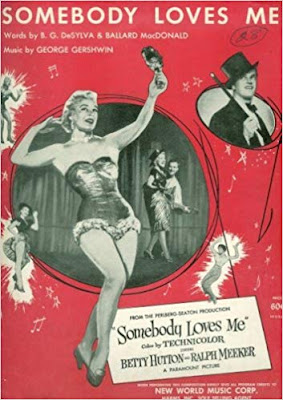 And Blossom Seeley's style was as brassy as Betty Hutton's was so her casting was no stretch. In fact Betty and her numbers are the best thing about Somebody Loves Me. Starting with the title song, the score is made up of period standards plus three new songs by Jay Livingston and Ray Evans.

There is a short that Warner Brothers made of the two of them right around the time they were introducing The Jazz Singer. It's the only record of their act around and I did do a review of it. I remember as a lad watching the Ed Sullivan Show and seeing Blossom Seeley performing well into the Sixties. I appreciate now that I saw one of vaudeville's last remaining stars still performing in her seventies. You can also see Blossom in the Russ Columbo film, Broadway Through A Keyhole where she has a supporting role.

Though Rube Marquard was edited out of Blossom's life for this movie, probably at his request, and Ralph Meeker is miscast, Somebody Loves Me is definitely a film that Betty Hutton's fans will enjoy... 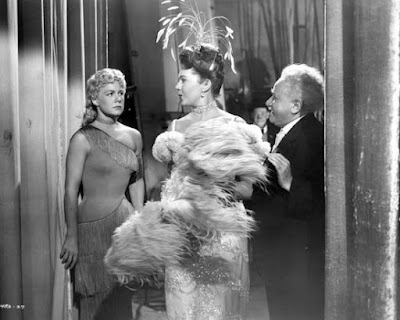 Posted by David Lobosco at 9:41 AM