THE WIZARD OF OZ: 80 YEARS LATER The much-loved film first appeared on August 25, 1939 at Grauman’s Chinese Theatre in Los Angeles, The Wizard of Oz was one of the best-loved Hollywood films ever made. It was the most expensive movie Metro-Goldwyn-Mayer had produced to date and it made an international star of Judy Garland, who had begun life with the not wildly glamorous name of Frances Gumm, but endowed with a compelling singing voice. MGM signed her aged 13 in 1935 and did its utmost to pretend that she was still a young teenager when she played the role of the film’s 12-year-old heroine, Dorothy Gale, who with her dog Toto is blown away by a whirlwind to Oz in Munchkin Land. Following the yellow brick road to find the Wizard of Oz, who she hopes will use his magic to send her home, she falls in with the Scarecrow, Tin Man and Cowardly Lion (played by Ray Bolger, Jack Haley and Bert Lahr, respectively), who also need the Wizard’s help. The travellers are welcomed to Munchkin Land by its inhabitants, the Munchkins, played by an assortment of dwarfs. The Wizard turns out to be a fake and Dorothy eventually returns home by clapping her hands three times and saying ‘There’s no place like home’.

In 1934, Samuel Goldwyn bought the film rights to the children’s novel “The Wonderful Wizard of Oz” by L. Frank Baum which was originally published in 1900. Goldwyn paid $75,000 for the rights and was hoping to turn it into a major motion picture and considered casting Shirley Temple as Dorothy and Eddie Cantor as the Scarecrow. (The Oz story had been previously adapted into a Broadway musical, which debuted in 1903, and also several different versions of the story were made into silent films). 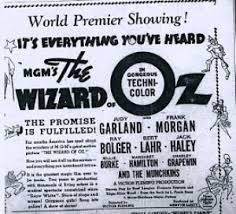 At the beginning of 1938, Metro Goldwyn Mayer (MGM) studios bought the rights from Samuel Goldwyn. The screenplay went through several revisions before the final draft was approved in October 1938. The principal roles were cast with Judy Garland as Dorothy (she was only 17 years old at the time production started and after the movie was released it would make her a major motion picture star), Ray Bolger as the Scarecrow, Jack Haley as the Tin Man and Bert Lahr as the Cowardly Lion, Margaret Hamilton as the Wicked Witch of the West and Frank Morgan as the Wizard of Oz. Buddy Ebsen was originally cast in the role of the Tin Man; he filmed a few scenes and then was eventually replaced with Jack Haley. (For more interesting casting notes, please see “The Wizard of Oz” movie trivia section later in this post)
Sadly, there was to be no place like home for Garland herself. Her life was a miserable progression through mental problems, addiction to alcohol and drugs, failed relationships, suicide attempts and desperate unhappiness until death freed her when she was 47 in 1969.... 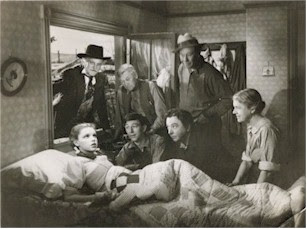 Posted by David Lobosco at 7:51 AM