BORN ON THIS DAY: BUDDY HACKETT 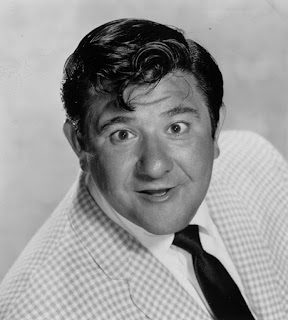 The great and underrated Buddy Hackett was born on this day some 95 years ago! Every role Buddy was a part of was funny and great. He was really an underrated comic. Hackett was born in Brooklyn, New York to Anna (née Geller) and Philip Hacker, an upholsterer and part-time inventor. He grew up on 54th and 14th Ave in Borough Park, Brooklyn, across from Public School 103. He graduated from New Utrecht High School in 1942.

While still a student, he began performing in nightclubs in the Catskills Borscht Belt resorts as "Butch Hacker". He appeared first at the Golden Hotel in Hurleyville, New York, and he claimed he did not get one single laugh.He enlisted in the United States Army during World War II and served for three years
in an anti-aircraft battery.

Hackett's movie career began in 1950 with a 10-minute "World of Sports" reel for Columbia Pictures called King of the Pins. The film demonstrated championship bowling techniques, with expert Joe Wilman demonstrating the right way and Hackett (in pantomime) exemplifying the wrong way. Hackett would not return to movies until 1953, after one of his nightclub routines attracted attention. With a rubber band around his head to slant his eyes, Hackett's "The Chinese Waiter" lampooned the heavy dialect, frustration, and communication problems encountered by a busy waiter in a Chinese restaurant: "No, we no have sprit-pea soup ... We gotta wonton, we got eh-roll ... No orda for her, juss orda for you!" The routine was such a hit that Hackett made a recording of it, and was hired to reprise it in the Universal-International musical Walking My Baby Back Home (1953), in which he was third-billed under Donald O'Connor and Janet Leigh. 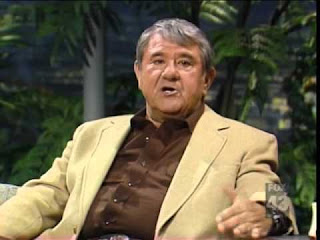 Hackett was an emergency replacement for the similarly built Lou Costello in 1954. Abbott and Costello were set to make a feature-length comedy Fireman, Save My Child, featuring Spike Jones and His City Slickers. Several scenes had been shot with stunt doubles when Lou Costello was forced to withdraw due to illness. Universal-International salvaged the project by hiring Hugh O'Brian and Hackett to take over the Abbott and Costello roles, using already shot footage of the comedy duo in some long shots; Jones and his band became the main attraction.

Hackett became known to a wider audience when he appeared on television in the 1950s and '60s as a frequent guest on variety talk shows hosted by Jack Paar and Arthur Godfrey, telling brash, often off-color jokes, and mugging at the camera. Hackett was a frequent guest on both the Jack Paar and the Johnny Carson versions of The Tonight Show. According to the board game Trivial Pursuit, Hackett has the distinction of making the most guest appearances in the history of The Tonight Show Starring Johnny Carson.

Two of Buddy's greatest film roles were in The Music Man (1962) as Marcellus Washburn and in It's a Mad, Mad, Mad, Mad World (1963) as Benjy Benjamin. The two movies is what I remember Buddy Hackett from the most. Sadly he died of a stroke in 2003... 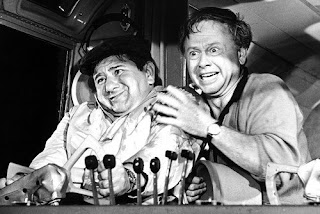 Posted by David Lobosco at 9:40 AM