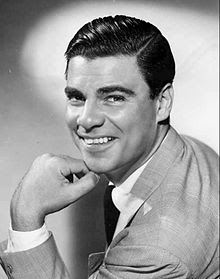 Every year my Grandfather would watch the Miss America pageant religiously, and even in my early teen years I thought the show was cheesy. However, the emcee of the contest in those older days made it at least watchable. That emcee was Bert Parks, who is largely forgotten now. Parks was born in 1914 in Atlanta, Georgia, to Aaron Jacobson, a Jewish merchant who had immigrated to the United States in 1900 from Latvia (then part of the Russian Empire), and his wife Hattie (Spiegel) Jacobson, the daughter of immigrants from Austria-Hungary.He had one older brother, Allen Jacobson.

Parks' had his first experience in amateur theatre when he was four years old. Parks entered radio broadcasting at age 16, for Atlanta's WGST. Three years later, he moved to New York City and was hired as a singer and straight man on The Eddie Cantor Show, then becoming a CBS Radio staff announcer. Parks was the host of Break the Bank, which premiered on radio in 1945 and was telecast from 1948 to 1957, as well as Stop the Music on radio in 1948 and television from 1949 to 1952. The success of Stop the Music took a toll on the ratings of the popular radio show hosted by satirist Fred Allen, who began spoofing Parks's program with skits mocking the premise of the show, one called Cease The Melody. 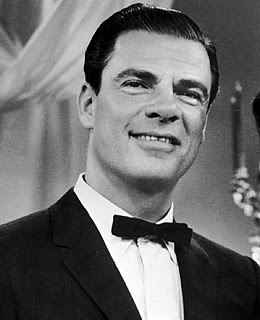 Parks' first game show was Party Line on NBC (broadcast from New York City NBC flagship station WNBT), which involved viewers calling in to answer questions and win $5 prizes; Party Line ran from June 8 to August 31, 1947, making its one surviving episode the oldest known game show and one of the oldest surviving television shows to have been recorded. Commercial kinescopes did not come out until fall 1947 (co-sponsored by NBC, DuMont, and Kodak), and the only kinescopes known to predate Party Line are a few episodes of Kraft Television Theater from February and June 1947.

He also helmed a daytime variety show in 1950, simply called The Bert Parks Show, as well as appearing in an episode of the comedy WKRP in Cincinnati. In addition, he also starred in a syndicated series called Circus! (featuring various circus acts from around the world) in the early 1970s. Parks also appeared in a 1976 episode of The Bionic Woman as the nefarious host of the "Miss United States" beauty pageant, involved in a plot to sell national security technology. 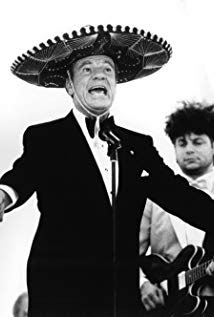 Parks is most famous, however, for hosting the Miss America telecast from 1955–79, after which he was unceremoniously fired by the Organization in an attempt to attract a more youthful audience. Tonight Show host Johnny Carson led an on-air campaign to get Parks rehired, but was unsuccessful. In 1990, for the 70th anniversary of the Miss America pageant (during which Miss America 1991 was crowned), Parks was brought on by host Gary Collins to sing "There She Is" to the new Miss America, Marjorie Judith Vincent. It was the last time Parks performed the song live.

Parks' last known TV appearance, a Pepsi commercial, first aired in June 1991.Parks did a take-off of his hosting role in The Freshman (1990), starring Marlon Brando, Matthew Broderick, and Bruno Kirby. He played the emcee of a Gourmet Club dinner where guests supposedly eat a Komodo dragon, singing a spoof of "There She Is" in a salute to the soon-to-be-deceased dragon. Bert Parks died on February 2, 1992... 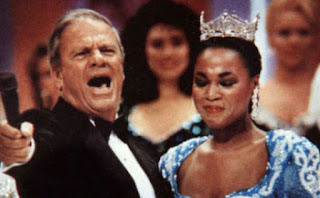