GUEST REVIEW: RHYTHM ON THE RIVER 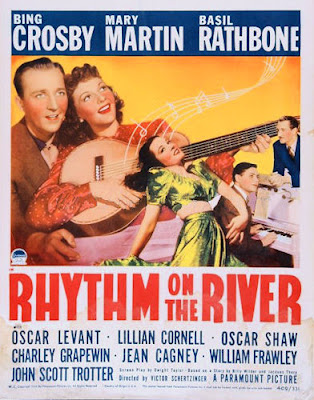 Poor Basil Rathbone, an egotistical composer who's lost his muse. He's been faking it for some time, buying his lyrics and his music from various sources. Trouble is that two of the sources (Bing Crosby music) and (Mary Martin words) happen to meet and fall in love. And then they discover what they've been doing. Complications ensue, but all is righted at the end.
Crosby and Martin sing terrifically. Mary had signed a Paramount contract and also at the same time doubled as a regular on Crosby's Kraft Music Hall Radio Show. For reasons I don't understand, movie audiences didn't take to her, so she went back to Broadway and did One Touch of Venus in 1944 and stayed there.
Basil Rathbone in one of the few times he played comedy does it very well. His ego is constantly being deflated by sidekick Oscar Levant and again I'm surprised they didn't do more films together.
As in most of Crosby's Paramount vehicles, no big production numbers, but the title tune being done as an impromptu jam session in a pawn shop is cinematic gold. It shows what great rhythm Bing had. Good job by all.

Billy Wilder is co-credited for the story, and his unsentimental touch is noticeable in this quite original tale of ghostwriting songwriters who both work for burnt-out music legend Oliver Courtney. The obvious misunderstandings are gotten out of the way quite quickly, thank heaven, and what remains is a witty and breezy concoction with some fine songs (and some more forgettable ones). 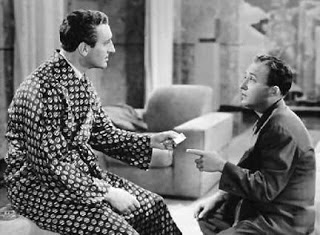 Crosby at his most charming, a great turn by Broadway legend Mary Martin and Basil Rathbone and Oscar Levant providing most of the cynical barbs (Levant is in rare form and his quips haven't dated at all). Martin's singing gives hope and question to the ironic fact that she never scored in movies, given four years to try and make it at Paramount before giving up and returning to Broadway where she had greater luck. Crosby is his easy going self as usual, dropping deadpan lines like a dog with a bone after realizing that nothing else remained to gnaw on. A delightful surprise, and recommended for all fans of the genre.
A surprisingly original plot and great entertainment...