RUTH ETTING AND NO MORE LOVE

One of the most haunting numbers in early movie musical was a Ruth Etting number from the now forgotten Eddie Cantor movie Roman Scandals in 1933. Etting should of had more of a movie career, but because of her gangster husband Martin "Moe" Snyder, I think she alienated many people in Hollywood. Here is a great story on this film debut... 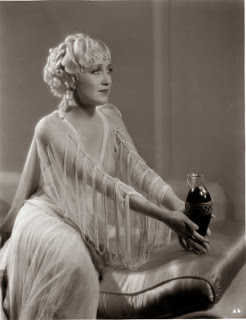 In his book book Ginger, Loretta and Irene Who? (1976), George Eells calls Ruth Etting, The Box-Office Bait. Samuel Goldwyn used her enormous popularity at the time to entice people to see the movie Roman Scandals and gave her only a very small part and one song, No More Love written by Al Dubin and Harry Warren. While her part may have been small, Roman Scandals marked Ruth Etting’s film debut, and was the highlight of her film career. She once again appeared with Eddie Cantor, her co-star in Broadway’s Whoopee, and her big number was a torch song she sang in a bathhouse full of nearly naked Goldwyn Girls.
Look carefully, and you can spot Betty Grable, Paulette Goddard, and Lucille Ball. In ‘Discovering Great Singers of Classic Pop,’ Roy Hemming and David Hajdu describe her debut, “Inevitably it was a torch song with which Etting made her movie debut, in Eddie Cantor’s Roman Scandals (1933), sobbing Warren and Dubin’s ‘No More Love’ in the movie’s famous Busby Berkeley-directed slave-market sequence {with dozens of chained chorines clothed only in long blond tresses...