THE APPEAL OF THE RITZ BROTHERS 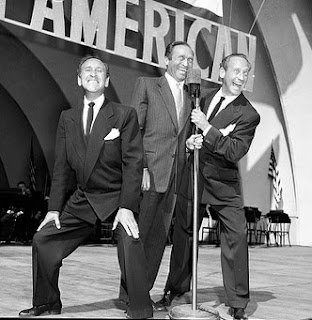 It seems like I always post stories on this blog about things that I like - and I guess I should. It is not a blog about what I hate. However, I wanted to take this time to write about The Ritz Brothers, a comedy act I do not like. I never understood their appeal through the years, and I still don't but I learned a lot about them while researching this article. The only film I saw them in was On The Avenue (1937) with Alice Faye and Dick Powell, and I thought they slowed down the whole movie, but obviously the Ritz Brothers had a lot of appeal in the 1930s and 1940s and still do today.

The Ritz Brothers were hired for a New York-filmed short subject, Hotel Anchovy (1934), produced by Educational Pictures. This did well enough for the film's distributor, Twentieth Century-Fox, to sign the Ritzes as a specialty act for feature-length musicals. During this period they appeared in On the Avenue, a 1937 Irving Berlin musical. That same year Fox gave the Ritz Brothers their own starring series, beginning with Life Begins in College.

The brothers had a large following, and some fans compare them to the Marx Brothers, but the Ritzes did not play contrasting characters like the Marxes did; the boisterous Ritzes frequently behaved identically, making it harder for audiences to tell them apart. The ringleader was always rubber-faced, mouthy Harry, with Jimmy and Al enthusiastically following his lead. They frequently broke into songs and dances during their feature comedies, and often did celebrity impersonations (among them Ted Lewis, Peter Lorre, Tony Martin, even Alice Faye and Katharine Hepburn). 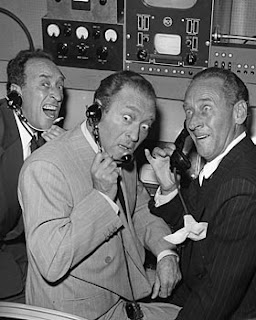 Their talent was also noted by Samuel Goldwyn, who borrowed them from Fox for his Technicolor variety show, The Goldwyn Follies, where they appeared with other headliners of the day including Edgar Bergen and Charlie McCarthy. Perhaps their most successful film during this period was Fox's 1939 musical-comedy version of The Three Musketeers, co-starring Don Ameche. Later in 1939 the Ritzes staged a highly publicized walkout (complaining about the low quality of their latest script, The Gorilla). Fox responded by completing The Gorilla anyway, terminating the Ritzes' starring series, and casting them in a B picture starring Jane Withers. The Ritz Brothers left Fox for good in 1939. In 1940 they moved to Universal Pictures, where they were scheduled to star in The Boys from Syracuse, but were removed from that production and reassigned to make brash B comedies with music. Their final film as a trio was Never a Dull Moment (1943).

The Ritz Brothers continued to appear on stage and in nightclubs, and made guest appearances on network television in the 1950s. They soon became a top Las Vegas attraction. In 1958 Harry participated in a sketch-comedy LP, "Hilarity in Hollywood" (also known as "Hilarity in Hi-Fi").

The Ritzes were appearing at New Orleans Roosevelt Hotel in December 1965 when Al died of a sudden heart attack. Harry and Jimmy were devastated, as the trio had always been very close. The two surviving brothers continued the act, and appeared together in a couple of films. The last appearances of the Ritz Brothers as a team (minus Al) were in the mid-1970s films Blazing Stewardesses and Won Ton Ton, the Dog Who Saved Hollywood, a spoof of the old Rin Tin Tin and Lassie movies. In Blazing Stewardesses the Ritzes were cast as replacements for The Three Stooges, who dropped out of the film when Moe Howard's declining health forced the trio to cancel. (Contrary to many accounts, Moe was still alive when Blazing Stewardesses filmed in March 1975; he was simply too ill to work. Moe died in early May of that year; Blazing Stewardesses opened a month later in June 1975.) Harry and Jimmy also made a lively encore appearance on television, as guests on Dick Cavett's PBS talk show.

Harry's final months were plagued by Alzheimer's Disease; Jimmy Ritz died in 1985 shortly before Harry, but Harry's health was so delicate that he was never told of his brother's death. Harry died the following year. I guess you can say that The Ritz Brothers have a cult following. They never did receive the attention that maybe the Three Stooges did, but I guess you can say the Ritz Brothers had their niche in classic Hollywood and entertainment in general. Maybe one day I will warm up to them and realize their talents as countless fans already do... 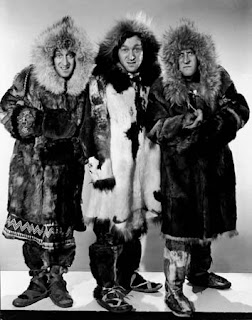 Posted by David Lobosco at 4:51 AM