Amazingly this dress from 1945's Mildred Pierce sold for $27,500 in 2016. Despite being a stunning piece of movie memorabilia, it has beenre-dyed at some point in its history and therefore, biddersshowed reluctance.

The dress was originally white, but was dyed to a flesh colour at Warner Bros., presumably for use in another film. It has also been altered and the original belt was missing, replaced with a later example. 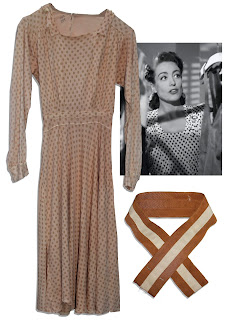 Mildred Pierce (1945) was directed by Casablanca's Michael Curtiz, and is considered Joan Crawford's defining role. Her first film for Warner Bros. after leaving MGM, it earned her the Best Actress award at the 1946 Academy Awards, as well as the title of Queen of the Movies...

SOURCE
Posted by David Lobosco at 8:40 AM