HISTORY OF A SONG: SMOKE GETS IN YOUR EYES 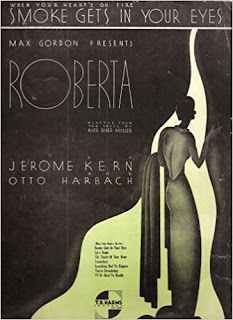 What I enjoy about the great songs of tin pan alley is that they are timeless. There are so many songs that I forget about and then get reintroduced to. I recently heard a recording of the song "Smoke Gets In Your Eyes", and I realized who great the song was all over again. "Smoke Gets in Your Eyes" is a show tune written by American composer Jerome Kern and lyricist Otto Harbach for their 1933 musical Roberta. The song was sung in the original Broadway show by Tamara Drasin. Its first recorded performance was by Gertrude Niesen, who recorded the song with orchestral direction from Ray Sinatra, Frank Sinatra's second cousin, on October 13, 1933. Niesen's recording of the song was released by Victor, catalog# VE B 24454, with the B-side, "Jealousy", featuring Isham Jones and his Orchestra.

Paul Whiteman had the first hit recording of the song on the record charts in 1934. The song was later reprised by Irene Dunne, who performed it in the original 1935 film adaptation of the musical, co-starring Fred Astaire, Ginger Rogers and Randolph Scott. The song was also included in the 1952 remake of Roberta, Lovely to Look At, in which it was performed by Kathryn Grayson, and was a chart hit in 1958 for The Platters. 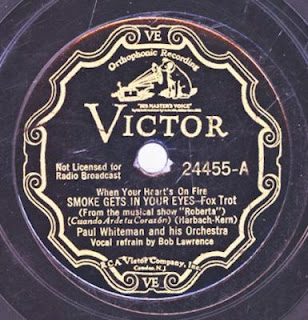 The song has been covered by numerous artists; the first being Paul Whiteman and his Orchestra, with a vocal performance from Bob Lawrence. This version of the song topped music charts in 1934. Other early covers of the song include that of the Tommy Dorsey orchestra, who released their contemporary version in 1938, with His Master's Voice. The B-side to Dorsey's single was "Night And Day". During the mid-to-late 1930s Larry Adler and Henry Hall recorded live radio performances of the song on BBC Radio broadcasts; Adler's rendition, a complex, syncopated, harmonic arrangement, and Hall's, a full orchestral performance with the BBC orchestra and a vocal performance from Dan Donovan. Henry Hall's version was also released as a 10" single. Art Tatum said in an introduction to a 1955 performance of the song that he performed "Smoke Gets in Your Eyes" in the 1930s, contributing to the song's popularity. However, it is unclear whether Tatum recorded the song during that decade; if a recording was made at that time, it may not have survived to the present day.

Possibly the most well-known version of "Smoke Gets in Your Eyes" was recorded in 1958 by The Platters, for their album Remember When?. The group's cover became a number one hit in the U.S. on the Billboard Hot 100 music chart. In 1959 the version went on to peak at number three on the Rhythm and Blues chart.The song spent 20 weeks on the UK charts, peaking at Number 1 for one week on 20 March of that same year. The Platters' producer, Buck Ram, reported that Harbach "congratulated Buck Ram and the Platters for reviving his song with taste." Jerome Kern's widow, on the other hand, disliked the recording so much she considered taking legal action to prevent its distribution... 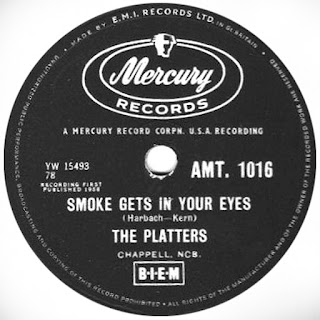 Labels: Paul Whiteman, Smoke Gets In Your Eyes, song history, The Platters